It's a beautiful May day, sunny and 65 when I begin my Route 6 Odyssey on the spit of land where the Pilgrims actually disembarked first;  Provincetown, MA.  Forget all that stuff you learned in school about Plymouth Rock (a mere piece of granite with dubious origins). In 1620, voyagers on the Mayflower set foot in the New World here, and stayed for five weeks before decamping for the more famous Plymouth.  The Mayflower Compact was actually signed in Provincetown Harbor.
I can’t overemphasize the importance of finding lodging with free parking in Provincetown.  Commercial Street – a one-way thoroughfare is not for claustrophobics.  This main drag is jam packed with tiny (coveted) Cape homes, boutiques, galleries, restaurants and swarms of tourists who move like a herd of cows on a country lane.  If you are impatient, please change your personality.  Otherwise, just enjoy the snail’s pace.
As I was saying, due to the narrow roads, there is hardly any public parking (there’s one large lot on MacMillan Wharf and that’s about it), so check into the hotel and walk.
If you can swing it, plan to spend a couple of days in P'town.  If you can't, the following are on my own "high priority" list:
Attractions:
Art's Dune Tour; Which I covered in a former post. Highlights history of the Cape Cod Dunes.
Pilgrim Monument is the tallest all-granite structure in the United States, completed in 1910 to commemorate the 102 religiously oppressed passengers of the Mayflower who spent 5 weeks here getting their land-legs.  (Why the history books leave out Provincetown’s prominence in colonial history is beyond me, especially since the Mayflower Compact was signed in Provincetown Harbor. The Plymouth Rock PR budget must be larger).  Besides climbing the 252 foot tower (116 steps and 60 ramps, with a worthwhile view from the top), you should spend some time in the “Grandma’s attic of P’Town,” the Visitor’s Center Museum, which is MUCH larger than it appears from the outside and highlights early Native American life, Pilgrim days, whaling and fishing industry and influx of artists. A Mayflower replica, Provincetown’s first horse-drawn fire engine and mock-ups of both a home and ship Captain’s Quarters take center stage, but poke around to find little gems, like the photograph of a black-face Eugene O’Neil who wrote and appeared in his play, The Thirst, as a “Negro Sailor.”www.pilgrim-monument.org, High Pole Hill, Provincetown, PA, 508-487-1313. 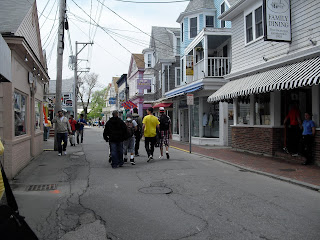 Walk Commercial St. – a must do for every P’Town visitor; Commercial St. is a parade every day.  You could spend a lifetime people-watching here. Just take a walk down this road that runs parallel to the ocean and explore the shops, galleries and restaurants. If you have any qualms about alternative lifestyles, however, be forewarned.  Divas reign where it’s Raining Men. I happen to love this kind of energy. 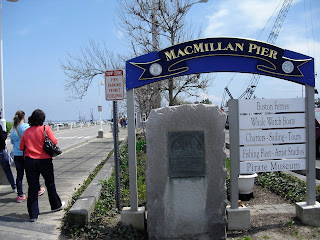 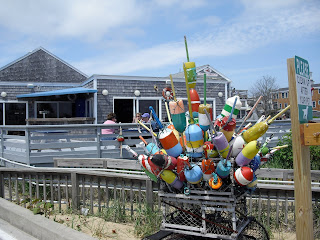 Whydah Museum;  MacMillan Wharf.  This is the real-deal-where-it-was-found-pirate ship museum; a must see 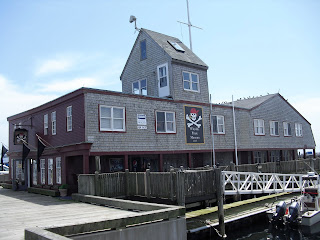 (but often missed) "treasure." (Sorry).   The Wydah, an English ship commandeered by famous pirate Sam Bellamy, sunk off the shores near here in 1717 and its remains were discovered by shipwreck hunter, Barry Clifford in 1985. Quite the entrepreneur, villainous Bellamy plundered 54 ships in one year alone, so  booty that has and continues to emerge from the deep is bountiful indeed.  Displays of skeletons in irons and skeletons as found by Clifford beneath sand and dirt offshore form striking counterpoints to genteel pewter plates, fine furniture knobs and swatches of textiles.    A collection of artifacts removed from the wreck is on a coast-to-coast National Geographic Society tour, but there’s plenty left in this small, unassuming museum at the end of Macmillan Pier in Provincetown.
Restaurants: 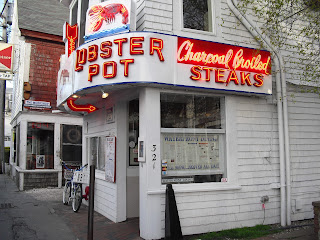 Lobster Pot Restaurant; www.ptownlobsterpot.com, 321 Commercial St., Provincetown, MA, 508-487-4863, Lines form early in season for this perennial tourist favorite seafood restaurant.  It’s a dive with a bit of a foodie bent.  A long, narrow building, you pass by a bustling open kitchen before entering the beach-set dining room where green Formica tables and beat-up bistro chairs belie the succulent food to come.  For starters, you expect shrink-wrapped melba toast and stale rolls, but instead get fresh pumpkin bread and warm crusty baguettes. And the signature 1 ½ lb. “Pan Fried Lobster” (with decadent sherry cream sauce), comes with a baby greens salad (brought to the table with four pots of salad dressing so you can try them all) and roasted potato.  Priced to Market – in early May this generally expensive meal was only $31. 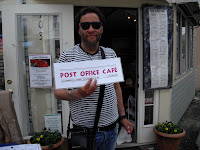 Post Office Cafe - is a cute little corner diner with friendly waitstaff and reasonably priced casual food.  It never was a post office, but the owner bought the contents of an old one for decor and was proud of the cafe's "fast and expedient service." So the name stuck. At night it turns into a cabaret, so come for breakfast or lunch unless you want service of another kind entirely.
I didn't try them out, but locals love The Mews (on the beach) and new sensation Ten Tables.
Lodging
Toss a handful of sand into the wind in Provincetown and each fleck will land on some kind of B&B, motel, lodge, hotel or inn.  Most are just fine, some are great and fun, like The Crowne Pointe Inn - a charming upscale B&B. The “E’s” at the end of Crown and Point might lead you to believe it’s pretentious or hokey.  It is neither. And neither is it associated with the large Crowne Plaza Hotel chain as I had first assumed. Former NYC Fireman, David Sanford and his partner Thomas Walter, purchased this 1700’s whaling captain’s home in 1998 (it was a guesthouse at the time), sunk a bunch of bucks and wit into its renovation and, viola – a charming, quiet, welcoming inn just one block off funky Commercial St.  Serene cottage-like rooms encircle a redwood and brick courtyard in which a rubber alligator head floats languidly around a small kidney-shaped pool and Buddha gazes down on a bubbling hot tub. Yes, whimsy abounds. Rooms vary in size – some are small and homey with the latest bedding, venetian blinds, and pleasing pastel walls, others large and stately. Off season, rates begin at $99 per night, and in high season begin at $234, which is unheard of in a resort town, even if everything else is a la carte.  But included in that relatively inexpensive rate is an extensive wine and cheese hour (there was a selection of 7 wines when I was a hosted guest), unlimited use of the saunas and mineral bath in the on-site world-class Shui Spa, and a savory multi-course, cooked to order gourmet breakfast for two. And FREE parking! For Route 6 explorers in the land-of-no-parking-spaces, this is the ultimate perk! www.crownepointe.com, 82 Bradford St., Provincetown, MA, 877-276-9631, rates $99-$650 and vary by season

Posted by Malerie Yolen-Cohen at 6:21 PM