Art's Dune Tours, Provincetown, MA; See the Start of Route 6 From the Beach 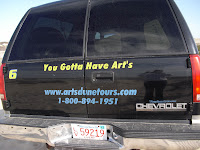 If you just have one afternoon to spend in Provincetown, I strongly recommend an Art's Dune Tour to get an overview of Cape Cod history and landscape.  Rob Costa has been driving visitors around the Provincetown, MA sand dunes for 30 years, since he was a mere 18 years old.  His Dad, Art, launched the company in 1956, and though there were imitators over the years, Art’s remains the sole surviving Dune Tour operator on Cape Cod.  Among the eminent guests that Art escorted around were Steve McQueen and Faye Dunaway who were in Provincetown filming the Thomas Crowne Affair.  Rob continues that folksy tradition.  He's got an encyclopedic knowledge of Provincetown and its sandy habitat, spouting off tidbits as diverse as “The Cape Cod National Seashore – a National Park established by President John F. Kennedy – takes up nearly 75% of the whole of Cape Cod,” and “Marlon Brando crawled across these dunes when he was rehearsing for A Streetcar Named Desire.” He points out the tenacious plants that cling to life in this sandy environment – rosehips, beach plums and cranberries that thrive in fresh-water pools found throughout the dunes.  Poets, painters and writers (Eugene O’Neil, Thoreau, Jackson Pollock, for example) stayed in squatters shacks originally built in the 1850’s as temporary shelters for heroic "Surfmen" who patrolled the beach, ever ready to rescue shipwreck victims.  A bit over 100 years later, the US Government removed all but 19 of these primitive dwellings – and now a few are available to Artists In Residence willing to live without electricity, fresh water or plumbing (but with one of the best vistas on the planet) for a few weeks at a time.

Posted by Malerie Yolen-Cohen at 3:31 PM