A cool (54 degrees) and overcast day as I exit Providence (vowing to come back and delve deeper).  Route 6 pairs at times with 195 and 295, but signage is great where it peels off.  Through most Rhode Island towns – Johnson, Chopmist, Foster, Route 6 is a commercial strip, indistinguishable from any other in the country; Target, Wallmart, Chilli’s, .etc. etc.  But then it surprises – by constricting into a two lane highway, thrusting through woods and lakes, tree-lined neighborhoods, farm stands and antique shops.  There are also “Motor Inns” either abandoned or hanging on by a thread – harking back to the days when this was a major vacation thoroughfare.
Crossing into Connecticut (great Welcome sign here!), Route 6 becomes a lovely wooded drive through forests and over green hills.  When I drove under I395 in Danielson, I actually felt sorry for those drivers….tata, Interstate!
In a few miles, I came into Brooklyn, home of worth the detour
Creamery Brook Bison Farm (2 miles from 6; well signed).  Debbi and Austin Tanner bought an old dairy farm in 1981 and purchased five bison in 1990.   They now have 90 – all for meat – and their slaughterhouse of choice – I kid you not – is the nearby EL Blood and Son.

Leaving Brooklyn, Route 6 alternates between a double-yellow striped two-lane highway and divided 4-lane, traversing woods, set-back homes, and exit for University of Connecticut, and – 22 miles from Hartford, the “end of Expressway” – which means traffic lights. 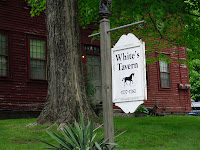 In Andover (birthplace of Nathan Hale), I veered a few feet from Route 6 where a little brown sign indicated the road that French General Rochambeau marched during our War of Independence. And what a good thing I did!  Running parallel to Route 6, the now dead-end Hutchinson Road (an old Route 6 alignment, actually) was the site of a Revolutionary War era “White’s Tavern” frequented by soldiers, including Rochambeau in the 1780’s.  I stopped to take pictures of the now-private 28 Hutchinson, marked by a White’s Tavern sign when an older couple emerged from the house.  Just my luck, they are the delightfully knowledgeable owners, Lorraine and Dale Busque, who adore living in such a historic home.  Lorraine allowed me to videotape her, and here’s my interview for all to see.
Route 6 goes through Bolton and Manchester – more diners, farm stands, churches, hot-dog stands and billboards. In Manchester, homes both modest and grand, sit closely next to each other, and of course there are the usual stores, gas stations, fire department, grocery stores, fast food places of a central community area.  Manchester is just ten miles from The Insurance Capital of the US – Hartford, CT.
In Hartford you MUST make at least one – if not a few - detours
1.     Mark Twain House;  (detour 1 mile off I84/6 exit 47), 351 Farmington Ave., Hartford;
“Travel is fatal to prejudice” – Mark Twain
I literally got goose bumps standing within reach of Mark Twain’s well-worn writing desk.  Sam Clemens is my favorite author of all time, and I’ve been to his house in Hartford, CT several times, but not since a wonderful massive Visitor’s Center was built.  You can sign up to take the popular 1 hour tour of Twains’ mansion on the hill, and hear all about his servants and family and doomed business ventures, but first walk through the Visitor Center gallery which now houses Mark’s desk, the Paige Compositor– a typesetting device that ruined him financially - and other personal items.  There are several “park benches” in the center of the room where you can sit and listen on headphones to the great man speak.  And you can also watch an abbreviated version of the Ken Burns Documentary in a comfortable theater.

Noah Webster Home;  227 South Main, West Hartford; closed on the day I came through, I know this is worth a less than 1 mile detour (off I84/6) if only to learn about the man who first contrived the Dictionary.  Yes, we have Noah to thank for the heavy Webster’s Dictonary; used and loved by SAT students countrywide.
There’s one more place to absolutely see
in the next town of Farmington;
Hillstead Museum;  If old grand homesteads and their contents bore you, consider this: Hillstead was designed by one of the first women architects in the country, Theodate Pope Riddle.  Her father, Alfred Pope, was an Iron mogul in Cleveland, with money enough to send his only daughter, given name “Effie,” to the prestigious girl’s “finishing school,” Miss Porters.  The school is still there – you actually see it on the way to Hillstead – and it was there that Effie decided to change her name to Theodate.  This and the fact that she told McKim, Mead and White that SHE would design her parent’s homestead at the end of the 1800’s endeared me to her forever.  Not only is the house magnificent, but Alfred and family toured Europe often and the industrialist had a nose for valuable art (before the artist became famous).  So, on the house tour, you’ll see Degas, Monet, Manet, Whistler mounted over fire-places and on walls, just as you or I would display our Home Good’s paintings.   My own tour was cut short, however, when the wonderful 90 year old tour-guide (who had done three other one-plus hour tours that day, in addition to gardening in the morning) fainted in the Guest Bedroom.  Farmington EMS, Ambulance, Police – all showed up within minutes, carefully making their way around the graciously set dining room table. I sure hope the guide is OK, though she was more concerned about not finishing the tour!  What a trooper.  I will return for the full experience some day.
Eat at Joey’s Garlic – right on Route 6 a mile west of Centennial Inn. It’s a great family restaurant with staying power.  Signature “Eggplant Fries” ($9.95 for Shrek-portions, can easily feed a table of 6) and a gooey, crunchy open Meatball, Cheese and Pepper Grinder ($9.95 – ditto) are worth the possible cardiac complications.  I promise to eat lettuce for the next few days….not.
Then bed down for the night at the extended stay Centennial Inn corner of 6 & 177.  More like an apartment, what the Inn lacks in frills (basic, basic décor and bedding), it makes up for in hospitality and service.  In the morning, an employee showed me how to make fresh scrambled eggs in the microwave.  Definitely a place to stay when you’re on the road and tired.
Posted by Malerie Yolen-Cohen at 6:13 AM