Some headlines are just too weird to pass up. Found this one today in Google Alerts, and, well, you can imagine my bemusement. I'd hardly call nine to 13 goats an "invasion," but ANY Pygmy Goat sighting is definitely out of the ordinary on a federal highway. I love the fact that there's a road in Wyalusing named Bowling Alley Rd. And that it took these little goats over a month to roam just one mile.

Here's the accompanying article in its entirety.

A number of people have been recently spotting a group of pygmy goats that have been roaming along Route 6 and the area near PenMart and Bowling Alley Road in Wyalusing Township. It is believed between nine and 13 of the goats escaped from the Wyalusing Livestock Market over a month ago, which is just one-mile down the highway.

US Route 6 runs right down the center of this up and coming Great Lakes city. Named by today's New York Times as "One of 52 Places to Visit" in the world,  I was privy to the fact that Cleveland is one fantastic place way back in the summer of 2011, when I wrote THIS.

Congrats to Cleveland and all other 51 spots mentioned!
Posted by Malerie Yolen-Cohen at 11:06 AM 0 comments

120 Miles from Smethport to Linesville, PA on US Route 6

WHY GO: Right on PA Route 6, Monster Truck driver, Joey Sylvester, made his World Record Jump in northwestern PA at the annual Cornfield 500. That should give you some idea of recreation in this seldom visited region of this long state. You’ll also find an old-fashioned rambling inn/dinner theater and some massive penitentiaries of fish (I’d say “schools,” but these carp are disgusting and rude) in a tourist spot where “ducks walk on the fish”. You’ll be on the Ohio State line when you end this drive, and can make the decision to head two hours to Cleveland or just another hour to Erie for some Great Lakes R&R.

120 Miles from Smethport to Linesville, PA on US Route 6

Barnside Sign on PA US Route 6
From Smethport, venture west 28 miles through the tiny rural communities ofPreston, Ludlow, Sheffield, and Clarendon then on to the relatively large city ofWarren (pop. 40,000), marked by a huge oil refinery on its Eastern end and the Allegheny River that arcs through downtown. With a Historic Downtown District (on the National Register of Historic Places), Warren is also home to Blair Corporation– one of the largest catalog companies in the world. The legacy of driven, industrious Pennsylvanian, John Blair, who in 1910 started his company by selling trademarked rubberized black raincoats to undertakers, Blair Corp. has grown into a billion dollar purveyor of elastic-waist leisure-ware.

It’s another 28 miles to the Miller’s place in Columbus, PA. Self-professed “Professional Rednecks,” Sabrena and Blair Miller got married on CMT’s My Big Redneck Wedding and founded what is now considered to be a premier international Monster Truck Competition, the Cornfield 500, held every Labor Day weekend on their property. (Joe Sylvester accomplished his 237ft. World Record jump – in his truck, Bad Habit – at the 2013 Cornfield 500). If you are traveling at the end of the summer and find yourself in a traffic jam in this very rural region of Pennsylvania, this is why; the Cornfield 500 draws over 20,000 monster truck fans for that one weekend a year. Check here for the rest of the post on Getaway Mavens.
Posted by Malerie Yolen-Cohen at 10:01 AM 0 comments

WHY GO: This 70 mile stretch of PA’s US Route 6 takes you back the kind of vacation you might have experienced in your long-ago childhood. Drive through rolling, emerald hills- very much like those of the Blue Ridge Parkway: Each twist and turn offers stunning views, and every once in awhile a slice of small town life. You’ve reached the eastern border of the PA Wilds and the Allegheny National Forest that theMavens covered HERE.

Wellsboro to Smethport on US Route 6 in PA Pine Creek Gorge, PA’s Grand Canyon, Colton Point SP
STOP: About 11 miles west of Wellsboro, turn left off of Route 6 onto Forest Rd. It’s a 5-mile detour (10 mile roundtrip) to see the 47-mile-long and 1,000 ft. deep Pine Creek Gorge known as The Grand Canyon of Pennsylvania. Not as vast as its western counterpart, and far greener, it is certainly worth the extra 20 minutes for the exceptional vistas.
For More about this stretch of PA, consult Getaway Mavens at: http://www.getawaymavens.com/70-miles-wellsboro-smethport-us-route-6-pa/
Posted by Malerie Yolen-Cohen at 8:16 AM 1 comments 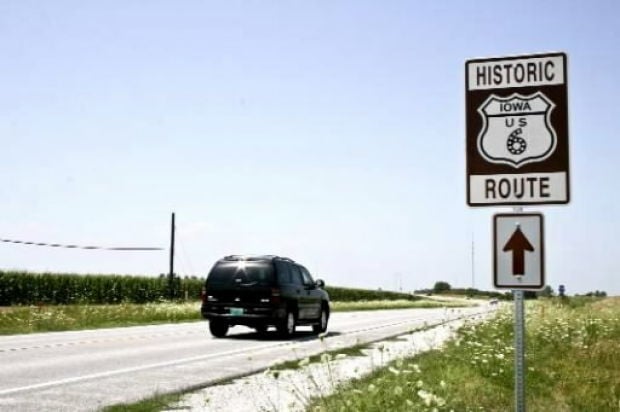 'RIVER TO RIVER: IOWA'S
FORGOTTEN HIGHWAY 6'
June
Date and location to be announced
Moline documentary filmmakers Kelly and Tammy Rundle turn their attention to the winding U.S. highway's stretch from Davenport to Council Bluffs, Iowa, including how the two-lane interstate predecessor played a part in the lives of Bonnie and Clyde, Jesse James, Nancy Drew and Jack Kerouac. The Rundles' first dramatic effort, "Sons and Daughters of Thunder," is scheduled to debut in the fall.
Posted by Malerie Yolen-Cohen at 8:56 PM 0 comments