A Westernaires Pictorial; Lakewood, CO on US Route 6

As many of my readers know, seeing the Denver, CO area Westernaires in action was one of the highlights of my US Route 6 journey and should be one of yours, too.  On any summer weekday evening, as the sun sets over the Rocky Mountains, you can watch these very talented kids working on their precision-riding.  Here's a taste of a Westernaire's day:


Posted by Malerie Yolen-Cohen at 8:10 AM 0 comments

Yes, Stay On Route 6 has a Facebook Fan page, and here it is.

Join one, or both, and keep up to date on my upcoming travel guide; Stay On Route 6 - Your Guide to All Historic 3,652 Miles of the Longest Contiguous Highway In The US. 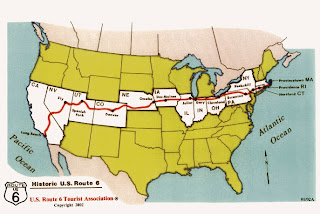 The Best Unique, Iconic, and Fun Company Towns in America (On US Route 6)

Drive all 3,652 miles of cross-country US Route 6, and you'll discover the ideas and products that made our country great.  From a "Johnny Tremain" like pewter factory in New England, to the aerospace industry in California, Route 6 is a timeline not only of US History, but of US Ingenuity.  The following are the Top 15 Company Towns (moving from east to west) on the Grand Army of the Republic (US Route 6) Highway;

1.  Sandwich, MA - The first town you hit on Cape Cod  was once the center of pressed glassmaking in the country.  In the mid 1800's this new technology enabled the Boston and Sandwich Glass Company to turn out sparkling, uniform table-ware.  Gone now, you can still see how it was once done at the   Sandwich Glass Museum; www.sandwichglassmuseum.org, 508-888-025, a clever, engaging place where you can watch a glass-blowing demo, holographic depictions of a colonist’s use of glass in her home, and of course glass shelves brimming with the colorful crystal that made this town famous.

2.  Woodbury, CT; Who knew this little fife and drum town could be one of the last bastions of pewter-making in the USA? One of the only surviving pewter factories in the United States, Woodbury Pewter, 860 Main Street South, Woodbury, CT, www.woodburypewter.com, open daily 9-5, sits right on Main St. Think Colonial-era kitchen and these irregular matte-grey plates and mugs come to mind. Though mostly a coach-bus-favorite gift shop now, you can watch artisans pour glistening molten pewter into molds. Seeing this might invoke memories of the required Middle-School book, Johnny Tremain. A pewter apprentice, Temain botched a pour, melding his fingers into a web.  Dangerous work.

3.  Brewster, NY; Brewster was the first headquarters of Borden Dairy in 1863.  Gail Borden patented condensed milk, built a plant at the intersection of what is now Route 6 and 22 and made a fortune supplying Eagle Brand Condensed Milk to troops during the Civil War.  By the early 1900’s many of the local dairy farms had been flooded during the construction of the nearby Croton Dam and Croton Reservoir system (built to supply fresh water to New York City 60 miles south), and Borden had to shut the plant in 1915.  To find out more about Brewster's history, you can't beat the compact Southeast Museum, www.southeastmuseum.org.

4. Allegheny Forest, PA: This region of PA is rich in natural resources: lumber, coal and gas have made many a man a millionaire here since the 1800’s. Nothing illustrates the vicissitudes of the local timber industry better than the Pennsylvania Lumber Museum,  www.lumbermuseum.org 18 miles west of Galeton in Sweden Valley.  It’s worth stopping in to learn about the logging companies that cut down these dense forests in the mid 1800’s, until the once-lush Alleghenies became a wasteland.  Enter Roosevelt’s New Deal and the CCC (Civilian Conservation Corps), which replanted and laid the groundwork for sustainably managing PA forests.  The Museum includes a series of weathered buildings housing lumber-related steam engines, a sawmill, mess hall and all services related to the sweaty, stinky, rough life in a logging/lumber camp.

6.  Kane, PA;  Anyone who has ever stacked rings on the wooden “Rocky Color Cone” has owned or played with a Holgate toy from the Holgate Toy Company.  Though the company no longer operates out of Kane, you will find a selection of it most popular items at The Depot,  www.kanedepot.org, the local train depot saved from demolition that now serves as a history and art museum for artifacts “made in Kane.”

7.  Warren, PA:  Warren is home to Blair Corporation – one of the largest catalog companies in the world. The legacy of driven, industrious Pennsylvanian, John Blair, who in 1910 started his company by selling trademarked rubberized black raincoats to undertakers, Blair Corp. has grown into multi-million dollar purveyor of elastic-waist leisure-ware. Find out all about it at the  Blair Museum of History, www.blair.com, 9-6 daily, inside Blair’s headquarters in Warren, which chronicles the life and work of John Blair.

8. Ligonier, IN:  Annie Oakley Perfumery, www.annieoakley.com, 1-800-922-6643,  is the only perfumery in the United States with all operations (R&D, production, packaging and distribution) under one roof. Owners Renee Gabet and her husband, Charles have carved out a little slice of Provence in the Midwest and imbued it with fragrant panache.

9. Nappanee, IN; While the more well-known attraction in town, Amish Acres, celebrates Amish past, the RV Manufacturer, NewMar, www.newmarcorp.com, represents Amish present. According to some RV enthusiasts, NewMar is the best in the industry, owned and operated almost entirely by Amish employees.  The manufacturing plant runs two terrific public tours daily, Monday through Friday at 10 a.m. and 1 p.m.

10.  Moline, IL: When Mr. John Deere moved from Vermont to Moline in 1847 to establish his self-scouring polished steel plow manufacturing company, he insisted that the railroad line extend to this Mississippi River outpost. Moline has been a Deere Company town ever since.  The John Deere Pavilion, www.johndeereattractions.com,  is an indoor wonderland for everyone who's ever been awestruck by big trucks and tractors. Here, you can climb into the cabs of these gleaming, new-leaf-green pieces of equipment and pretend that you're on the job.

11. Newton, IA: Hometown of Maytag Appliances, Newton was known as “The Washing Machine Capital of the World,” and indeed before Whirlpool purchased the company in 2006, every Maytag washing machine was manufactured in this small Plains town. Currently, Maytag Dairy Farm, www.maytagdairyfarms.com, still churns out famous Maytag Blue Cheese.  Beloved by Emeril Lagasse and Martha Stewart among many other chefs, Maytag ships a million pounds of cheese around the world every year.

13.  Golden, CO:  OK, let's freely associate.....think "Golden Colorado" and if you've ever watched sports on any network, you'll probably think "Coors."  Yep, Golden is certainly a Coors (and now Coors/Miller) town.  Coors, which merged with Miller in 2008, is the country’s largest brewery under one roof and employs 1,800 in its Golden plant and another 3,000 in The Valley- making this the largest employer in the area.  The Coors Brewery Tour, www.millercoors.com, is Golden’s premier attraction for a reason.  Not only can you traipse through the inner sanctum of the World’s Largest Single Site Brewery, you are entitled to three complementary 8 oz. glasses of a beverage “that has never left the brewery.”

14.  Lone Pine, CA;  Watch the 20 minute documentary at the Beverly and Jim Rogers Museum of Lone Pine Film History, and you’ll realize why every single silent western, singing cowboy movie, and later the movies that made John Wayne and Clint Eastwood household names look the same. They were all filmed in the strange, rounded sandstone formations that comprise the Alabama Hills a few miles away. Though now relatively quiet, every few years, filmmakers get a hankering for this recognizable backdrop; parts of Tremors and Iron Man were filmed here and the Hills are still used quite a bit for TV ads (particularly pickup truck commercials).

15. Mojave, CA;  Air and Space Port, www.mojaveairport.com, the "world's premier civilian aerospace test center," is where Sir Richard Branson has been testing his newest creation, “The Feather” for his Virgin Atlantic commercial spaceship spinoff, Virgin Galactic.  If you’re lucky, you may see this catamaran-like rocket alight as you drive by, or time your trip for a 2pm weekday tour (call for RSVP).

Iowa on the Radar; Caucus Puts Small Iowa US Route 6 Towns On the National Map

Today, I opened my New York Times to read this op-ed post by Frank Bruni; Iowa Caucuses' Bitter Harvest.  To me, the piece was not so notable for its content (a rather standard NY Times position on outside-of-mainstream, sometimes nutty sometimes self-defeating Republican campaign antics), but for its dateline; Coralville, IA.


CORALVILLE!!  Not only do I know where Coralville is (adjacent to Iowa City) - but I have some newfound friends there - all because that's where US Route 6 took me on my journey across the country. Newton, IA, former home of Maytag Appliance Co., and where the Maytag Dairy still churns out phenomenal Maytag Blue Cheese -was also mentioned by Bruni.  It, too, is a Route 6 town.


Between election years, to those who live on the coasts of the US, Iowa is just that flat place in the middle of the country, studded with barns and silos, where farmers grow corn and pigs.  But every four years, our nation is fixated on this Midwestern state.  Iowa makes headlines in major newspapers, media flock there to follow the candidates, and it becomes a focal point of the national political scene.


But as I discovered on my transcontinental road-trip, Iowa is so much more than just corn, pigs and even politics. It is a hardworking, sometimes surprisingly sophisticated state full of friendly people.  I  never would have discovered this had I not traveled the longest contiguous federal highway in the country -  US Route 6 - from end to end.


Stay tuned for my book: Stay on US Route 6; Your Complete Guide to All 3,652 Historic Miles of The Country's Longest Road, which will be available in late winter/early spring. 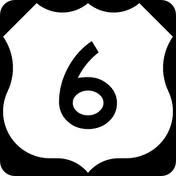