Off Cape Cod to Providence, Rhode Island on Route 6

Route 6 A rejoins 6 just before it crosses over the Sagamore Bridge.  You realize here that Cape Cod is actually an island, separated from the mainland by the Cape Cod Canal which was carved out in 1913.  Before the Canal, ships sailing from Boston south or from the South to Boston would have to travel out 60 miles and sail around Provincetown Harbor before hooking back to the mainland.  The canal made it possible to save time and lives; going around the Cape was treacherous business.
From the Sagamore Bridge, Route 6 hugs the Canal through Buzzard’s Bay then veers off into down-at-heels Wareham – once the only way to get onto the Cape before 195 and Route 25 bypassed this sorry town.  Sad ruins of those vacation day pastimes remain, though most are closed or seedy here; Mini Golf, T-Shirt shops, “Barnical Bills Seafood” and other resort reminders line the road. Rt. 6 is called the Cranberry Highway here – and once I got through the honkey tonk, I saw why.  Route 6 suddenly turns into a rural, salt-marsh, cattail lined, magnificent place.
If you're here on a weekday, you might want to detour a couple of miles to A.D. Makepeace off Tihonet Rd.  Makepeace calls itself the "World's Largest Cranberry Grower" and you drive through miles of bogs as you approach their small Visitor's Center.  It was closed when I came by, however.
Route 6 turns left in the middle of Wareham’s Main St. and I found the signage puzzling.  There was a State Road 6 sign – the number 6 centered within a box.  And then there was a Federal Road 6 – the number centered within a shield.  FYI – any time you see a road number within a shield, it’s a federal – not a state- road.  In any case, perhaps Wareham was just covering it’s sixes here! 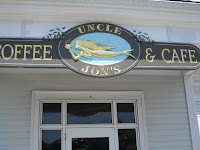 I met my Boatinglocal.com editor, Tom, who lives around here, for a coffee at his favorite “work spot” – Uncle Jon’s Coffee and Café in Marion (a very yachty sailing town right on Buzzard’s Bay; regatta central). Tom filled me in on the history of the area (including the effects of Route 25 bypass), and told me that a kayaking friend of his declared Wareham to be “the Kayaking Capital of the World” – it is so gorgeous here – there are more inlets and waterways to explore than any other place in New England in his estimation.  The “seedy element”, however,  is a hurdle.
Next, Mattapoisett, with a rich shipbuilding and sailing history.  I had heard about South Coast Local Diner – so I had a wonderful pulled chicken BBQ Sandwich ($10).  It was like eating inside a tin can – the tin ceiling and walls were incredibly well-preserved. 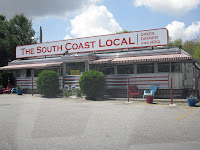 Route 6 skirts around the remainder of the Massachusette’s old mill cities.  Most of the road could be any strip in America; big box stores, nondescript Chinese Food palaces, malls, fast food.  You’d have to take detours through New Bedford and Fall River to see any attractions and there are a couple I’d recommend if you have the time.  I’ve spent time in these struggling, but trying-to-revive places and slowly they are making headway.
Route 6 skirts Fairhaven – a town with unbelievably beautiful architecture, thanks to Henry Huttleston Rogers, founder of Standard Oil, who endowed all the buildings – and was also a benefactor of Mark Twain.  Twain spoke at the opening of Fairhaven’s library – the Millicent – and his handwritten note can still be seen above some bookshelves there.  As a Twain fan, that was one of the best hidden finds I’ve ever uncovered on a writing assignment! Fairhaven has been called the unsung EPCOT, and it's worth an hour or so to take a walking tour of the town. Also - Fort Phoenix provides a great thrill for teens with one of the best Musket Demonstrations I've ever seen.  Let's just say that implements of war have improved over the years.
Route 6 comes into New Bedford on the historic Swing Bridge.  Three excellent attractions are worth the detour:
1.  Whaling National Historical Park Visitor Center;  this part of town was designated a National Park in 1996 after congress deemed New Bedford the best place in the United States to tell the story of whaling.  Once the “City That Lit the World”, more pure, smokeless spermaceti (whale oil) was unloaded off whaling ships in New Bedford than anywhere else in the country.  In its heyday, 750 whaling vessels plied the waters of the world from United States shores.  Five hundred hailed New Bedford.
2. A block from the Visitor’s Center, the Whaling Museum presents artifacts and a 22-minute orientation film depicting the whaling industry in all its guts and glory.  A plaster relief of a Right Whale (so named because it was the “right whale to hunt”) and the skeleton of an enormous Blue Whale greet visitors in the main hall.
3. Across the street, the Seaman’s Bethel – a church built in 1832 to counteract the “licentious” temptations of the waterfront, and made famous in Herman Melville’s Moby Dick – still operates as a house of worship.  Inside, a bow-shaped pulpit juts into a small pew-lined room and cenotaphs (“empty tombs”) of men who did not return from the sea line the walls.  One memorializes poor 18 year old Charles Petty who died in 1863 after being bitten by a shark while bathing off the African coast.
In New Bedford, Route 6 runs inexplicably one-way through a neighborhood of decrepit, sagging row houses – a very bizarre alignment - before emerging onto a wider 4 lane road.  This wider route runs into Dartmouth – a much more upscale community – where car dealerships, big box stores, fast food franchises and banks hold sway.  There’s a Harley Davidson Dealer as well as a Marine dealer here, too.  Money.
If it gladdens your heart to see our citizens out and spending money, you’ll love most of Route 6 in this portion of MA.  The road was clogged with mall-bound shoppers, families out to play mini-golf and ride bumper boats.  It makes sense that towns would put busy businesses on the busiest of roads.  At least in this area of the country, commercial prospects remain relatively strong – though Mom and Pop stores are shuttered or sorely missing.

Through Westport (wide open and 55MPH here), then into Fall River – home to Lizzie Borden (you can actually spend a night in her old house) – where Route 6 forms contortions through the city.  It is detoured all over the place – but fortunately, the detours are well-signed.  Fall River has been stymied by its snarly roadways, and I believe city government is attempting to straighten them out. Just goes to show that no road – especially those that go through highly populated areas – remain stagnant for long.
If you haven't explored this part of the US, it's worth another (less than a mile) detour off 6 to visit the world’s largest collection of WWII Naval ships, designated a National Historic Landmark, Battleship Cove (508) 678-1100; www.battleshipcove.org. It's a huge draw for Scouts, scholars of the Second World War, those who served on these powerful fighting vessels, and for anyone interested in getting up close and personal with acres of floating gray. 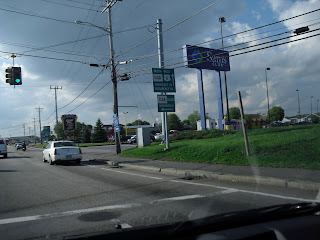 I had planned to stop at or at least try to capture Welcome Signs from every state, but the "Welcome to Rhode Island" sign is hidden behind trees and shrubs on Route 6.  Hey guys - clean it up!! 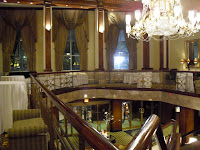 Providence, RI for the evening, staying over night with friends (the only time I'll do this).  I have it on good authority, however, that the Biltmore Hotel is THE PLACE to stay.  And - you can also stay for a month and not see all of the city's charms.  Home to Brown University and Rhode Island School of Design (RISD), it's been proclaimed "The Coolest City in America" - and I wouldn't dispute that.  Coolness is palpable here.
Posted by Malerie Yolen-Cohen at 8:05 AM