Newtown, CT to Hawley, PA on US Route 6

Route 6 out of Newtown is a lovely, green, 2-lane drive.  It’s quintessential 2-lane New England.   In a few miles – in Bethel – the road gives way to a modest commercial “strip” – some restaurants, a nice Inn – and then in Danbury, CT – where 6 pairs with I84 for a couple of miles,  I could tell I was in an a) college town – Western Connecticut University and b) off an interstate  - I84.  Lots of chain hotels; Best Western, Hilton, Days Inn, Howard Johnson – and local giant, Ethan Allen Inn – line the wide 4 lane road here to serve students and parents who also avail themselves of plenty of pizza joints, fast food, car washes, gas stations – the whole nine yards.  And for some reason, there’s a preponderance of puppy stores (mills?) here, and the Veterinarian office to serve them.
Danbury, CT borders Southeast, NY and Brewster; you come into New York on 6/202 here.  Yay- another well-maintained Welcome To New York sign and then a green Grand Army of the Republic Highway sign.
Brewster, NY is a bit on the depressed side. Storefronts are old or abandoned.  Day workers gather on the sidewalks looking for work, but it’s always been a “hardworking” blue-collar town said Southeast Museum Director and Master’s level historian, Amy Campanaro.  I strongly suggest stopping for a few minutes into the great little museum that focuses on the history of Brewster.  From 1864 to 1897, this was the location of the country’s largest iron mine – Tilly Foster.  The ore here is a very magnetic “magnetite” which was a coveted form of the metal.  When the Croton Aquaduct was being built, however, the large pit scooped up by miners began to flood, killing many immigrant workers.  The mine was forced to close, but the Brewster area is still known for the high-grade quality of its minerals (some are displayed in the UK at the British Museum) and also for the origins of the Borden Dairy Company in 1863.  Gail Borden patented condensed milk and his plant canned the stuff and sent it off to troops during the Civil War – a luxury in times before pasteurization.
Down the street – 50 year old Bob’s Diner is still a popular local hangout. 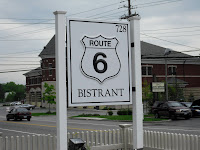 Through Carmel – a mega shopping area - then cutting through and traversing a reservoir, I come into Mahopac and pulled over at the Route 6 Bistrant – opened just 4 months ago.  It’s a burger place with friendly staff, where I discovered that the town used to be the main ice-supplier for New York City after the railroad was built.  Blocks of ice cut from Lake Mahopac (which also brought vacationers from the  to 4 large hotels – all burned)  were sent via freight to the city.
I took the Route 6N segment out of town and was rewarded with beautiful lake views – even on this dreary morning.  As it has every day since I started out, Route 6 alternates between a bucolic country road and a strip shopping center mecca.  It’s got a range of personalities. In the town of Mohegan Lake, there was lots of traffic snailing into Big Franchise parking lots.  And more puppy stores. What’s with the puppies in this part of the country?
Peekskill is the last Route 6 town before crossing the Hudson River and with a funky, rough, artistic vibe.  Hudson Valley Center for Contemporary Arts, squeezed between auto parts stores and muffler shops on Main St. (Route 6) is only open  Sat Sun noon-6 but if you are aficionado of avant garde art, you’ll love it.
Stop for lunch at Birdsall House – 970 Main St. (Route 6) –declared one of 19 “Hottest New Restaurants in Westchester” by Westchester Magazine.  Don’t let the dive-pub exterior fool you.  This is a serious foodie joint; farm-to-table, seasonal. The glory goes into the food, not the décor which is Early Linolium.  Lunch was up there with the greats.  I had the “Beet and Grain Burger” which was covered with sautéed onions, goat cheese and wilted spinach.  I know, I know – but it totally worked!  I’d drive hours for that dish alone.   Birdsall House is known for craft beer on tap – the motto is “Beer is Good” and on the menu it’s written, “Thank you for your beersness.”  Who wouldn’t love a place like that?
From Peekskill. Route 6 is far and above the most dramatic portion of the Route so far on this trip;  switchbacking up and down cliffs, though hewn rock with river views to my right.   I took lots of video, so my drive movie is a bit longer than usual.  But this bit of the road warranted it.


Route 6 crosses the Hudson River at Bear Mountain Bridge – my absolute favorite Hudson crossing (I’ve been on them all). Rustic and short.  The west side of the river is Harriman State Park – green park roads for miles and miles.  Not a light. Not a store. Lovely.
I’d thought about stopping in Monroe to see the “living history museum” Museum Village, but when I got off 6 on Museum Village Rd. there was absolutely no indication of which way to go.  So I got back on Route 6 and left it in the dust. 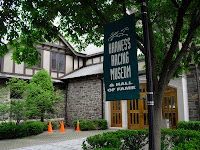 There was no such signage shortage in Goshen, NY where, Holy Horse, I discovered yet another incredible museum - Harness Racing Museum and Hall of Fame; daily 10am-5pm just a mile off Route 6.  I realized it wasn’t just another stuffy glass-case place when I pulled into the lot and spied a racing horse in harness out on the track behind the museum.  Turns out Goshen is the “Cradle of the Trotter” – and this track is where our American version of Harness Racing began in 1838. This is what happens when competitive guys racing wagons is organized into a sport.  The new 40,000 sq. ft. museum is clever and fun.  You can “bid” on a horse during a “live” (virtual) auction, you can sit on a sulky (the little carriage) behind a faux horse.  You can “call a race” on a microphone.  And the kicker attraction – there’s a 4 minute “Simulator” where you actually feel what a jockey feels behind a horse through the magic of moving seats and a big, windy fan while watching a you-are-there film.  It is cool.  And free.  There are parents who bring their kids every weekend just for the experience.
From Goshen it’s 24 miles to Port Jervis; off Exit 123, 6 spits with 17 into a 2 lane traffic-light commercial boulevard, and then into a stretch of farmland.  Greenville? Yes.


Port Jervis is home to Gillinder Glass Museum, which supplies 50% of all runway lights in the U.S. as well as the typical vases and glassware.  I didn’t get there in time for the 1:30 tour, so wasn’t able to see the plant, but you can visit without the tour, too.
Leaving Port Jervis, Route 6 parallels I84, and it was strange to crawl along the two lane road as cars and trucks whizzed by right alongside. 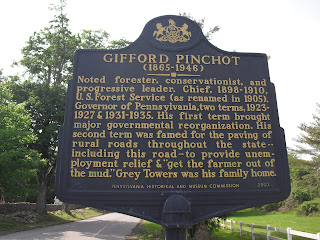 There was no Welcome to Pennsylvania sign that I could see. Perhaps it’s up on 84?  Leading up to Milford, PA, it’s a hodgepodge of mobile homes, motels, florist shops; and then, abruptly – the charming little tree-lined town appears and “yield to walk” signs slow things down dramatically.  Cute house wares shops, art galleries and restaurants on Main St.  No time to shop – I had to check out Grey Towers National Historic Site – the imposing mansion that belonged to Gifford Pinchot, .the founder of the U.S. Forest Service. (And according to this sign, responsible for the "paving of rural roads" during his tenure; quite the irony).  Tours are only given on weekends, but I walked the idyllic grounds awhile. 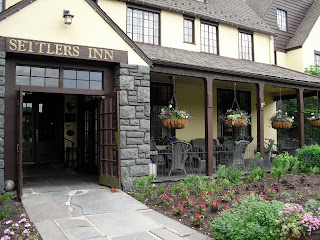 Pennsylvania is the only state with dedicated Route 6 tourism development.   Milemarkers help travelers determine where they are on the nearly 400 miles of Route 6 PA.
Before pulling into Hawley, the levee of Lake Wallenpaupack loomed into view.  Across the street – lots of hotels to service boaters and beach-goers.  This is just one of many lakes in this region, making it a summertime recreation center. No time to recreate.  It's time to write, eat, sleep, then hit the road again!

My choice of lodging here: The Settler’s Inn* – a 21 room Craftsman Style hotel/restaurant on the Select Hotel Registry.  Pillowtop beds, Jacuzzi bathroom – it was my perfect cocoon for the evening.  What a perk that one of the top restaurants in town was just downstairs.  I sampled the signature Applewood local trout – smoked right on site, and the Maple-Glazed Lamb Ribblets – both were superior. Breakfast is equally delish.  My great waitress, Jean Marie, brought riccota crepes topped with strawberry compote to the table, but as an overnight guest, I could have chosen any of the dozen items on the gourmet breakfast menu.