Smethport, PA to Cambridge Springs, PA on US Route 6


It's 100 miles between Smethport and Cambridge Springs, PA, but I took a detour off Route 6 today -19 miles each way – just to indulge a curiosity.  Zippo maintains a great little museum in Bradford, PA and I just HAD to see it.  I picked a perfect rainy day, too.

If you stay in Smethport, Ross will give you directions, otherwise, hook a right from Route 6 onto Route 219 between Smethport and Kane and drive 19 miles to Elm St. Exit.  Follow signs to Zippo Museum.  It's the home of the “Windproof Lighters; It works or we fix it free.”  There’s a terrific 9 minute orientation film that tells the story of George Blazedale who modified an Austrian design and named it after the “zipper,” which had recently been developed in Meadville PA (on Route 6!).  It became a must-have, fashion accessory, gift item and coveted by GI’s during WWII.  The museum creatively displays these collectibles – on one wall, there’s a mural-sized American Flag made completely from colorful Zippo lighters. 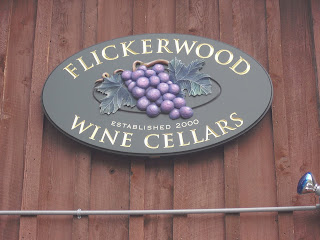 Curiosity sated, I drove 20 minutes back to Route 6, turned right and in a few minutes was in the center of Kane.  Yesterday in the late afternoon I had visited one of several wineries cropping up in this part of PA.  Flickerwood Wine Cellars, owned by former U.S. Forest Service guy Ron Zampona and his gregarious wife, Sue is definitely worth a stop. They are marketing geniuses,  and offer 35 varieties of vino, the best of which is the dessert and sweeter wines. One daughter creates the labels, and I have to say that they are some of the most inventive (not to mention intriguing) I’ve seen.    This month, they launch a blackberry/blueberry blend.  Sue wanted to call it Black and Blue, but by family vote, they settled on “Bruised” with a suggestive, cool label.

I’ve come to discover that the people out here in Northern PA take initiatives in many creatively resourceful ways.  Kane artist, dapper Denny Driscoll, is one of those resourceful people.  He is the town’s (and extended Route 6) unofficial historian.  Denny jokes that his wife tells him he’s “over sixed.”   I met him in Kane’s Railroad station – called The Depot – which Denny helped saved from demolition and now serves as a history and art museum housing artifacts “made in Kane.”  Many of these artifacts are toys from the Holgate Toy Company. Anyone who’s ever stacked rings on the “Rocky Color Cone” has owned or played with a Holgate toy.  Norman Rockwell’s brother, Jarvis, designed these iconic toys for Holgate from 1930 until 1965.  Denny also pointed out a photo of the son of the town’s namesake, Dr. Evan O’Neill Kane, performing hernia surgery on himself in 1932 to prove the effectiveness of local anesthesia.  “Many people from Kane were explorers.  Dr. Kane applied that spirit of exploration in the medical arena,” Denny said.

Before leaving Kane, Denny took me to the dive-y Texas Hots for their signature hot dog; smothered in spicy baked beans.  Many people come to Kane just for these little hots – delish.

Next it was on to the relatively large city of Warren, marked by a huge refinery on its Eastern end.  Warren is home to Blair Co. – one of if not the largest catalog companies in the world.  Started by another driven, industrious Pennsylvanian, John Blair, in 1910, the leisure-wear company has grown into a billion dollar operation.  Blair Catalog developer, Jim McQuiston, put together a Blair Museum of History inside the retail store in Warren, and invited me to see it.  With the founder’s connection to FDR and his progressive thinking, I told McQuiston I believe there should be a book and/or a History Channel project about John Blair in the works.   I took a short video; enjoy.

A few months ago, Sabrina Miller from Columbus, PA contacted me by email and asked if I could stop by on my way West.  She and her husband consider themselves “Professional Rednecks” and wanted to meet me.  A couple of years ago, they were married on CMT’s My Big Redneck Wedding and 10 years ago founded what is now considered to be a premier international Monster Truck Competition, the Cornfield 500 – held every Labor Day weekend on their property.  My interview with Sabrina and Blair:

Cambridge Springs was built around the same formula as Saratoga Springs and all the other hot and mineral springs towns in the 1800’s.  Back story; man pokes around for oil, finds mineral water. Once this elixir was discovered, claims spread (probably through clever hawkers) that the drink was healing and restorative. Tourists soon followed, and then just as abruptly left when the FDA declared that these springs didn’t cure anyone of anything.


I stayed overnight at the 126 year-old Riverside Inn – a classic old resort; a real throwback.  The dining room serves theme buffets, waiters in the pub actually engage in conversation with the locals who hang out there (and the occasional CT gal).  No TV’s in the rooms, which are bare bones, clean and pink-flower sweet.  Small bathroom,  linoleum floors.  But people come back time and time again for a singular old-timey experience and to see the dinner theater, which is as funny and bawdy as it gets.  Surprisingly, two of the actors now own the place.  I had the pure pleasure of seeing the “Queen Roast” – saying goodbye to the woman who has played the Queen in the Medieval Knights show every Fall for years.  She - Brenda Evans - is also part owner. Her partner, Ken Falkenhagen, was formerly the theater manager and fell into inn ownership by virtue of "being there."  The former owners didn't want to sell their beloved Riverside into the hands of Assisted Living developers, and they saw in Ken a man who could continue the tradition.  "It's very gratifying to come to a place you love every day and know that it's continuing," he said.

Posted by Malerie Yolen-Cohen at 6:59 AM