Joe Hurley, The Guy Who Walked Across the USA on Route 6, Just Released HIS Book; Ten Million Steps On Route 6

From ZERO, count them, ZERO books about US Route 6 aka The Grand Army of the Republic Highway, there are now TWO; released within a month of each other.  And not only that, but the two authors live about an hour from each other in one of the lesser known states in the country - Connecticut.  What are the chances?

I just finished Joe's great "cocktail table" type book, replete with gorgeous photos and his homespun, Mark Twain meets Studs Terkel essays about the folks he met along the way. 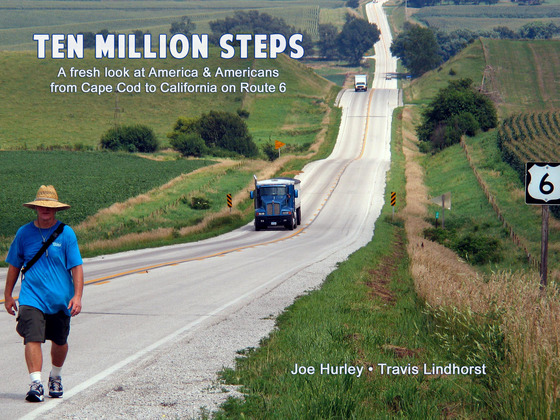 Here's what one newspaper said about Ten Million Steps on Route 6;

Ten million steps on one of America's longest, most historic highways taught retired News-Times reporter Joe Hurley that nothing ever goes as planned, and sometimes the best way to move forward is to punt.
Yet Mr. Hurley, then nearing 60, accompanied by Travis Lindhorst of Brooklyn, N.Y., a 28-year-old photographer he found through Craigslist, also discovered dogged determination goes a long way as he embarked on the 2004 cross-country walk from sea to shining sea.
Such pluck helped when they were caught in a Nevada snowstorm without a cellphone, and when sweat poured off them in the scorching heat of Iowa.
"It was unlikely that we would finish," said the witty, self-effacing Mr. Hurley, who dryly describes the nine-month journey in the just-published book, "Ten Million Steps on Route 6."

My book, Stay On Route 6; Your Guide to All 3652 Miles of US Route 6, a mile by mile guide to the best places to see, eat and sleep while driving cross-country, couldn't be more different than Ten Million Steps, but is completely complimentary! His is all pictures and stories, mine is service-minded and full of recommendations.  In fact, Joe and I discussed doing book signings together one of these days.

So, if you know someone who loves road-trips or "Real American" stories from the heartland, buy BOTH books.

Click here to purchase Ten Million Steps; A Fresh Look at America and Americans From MA to CA

Click here to purchase Stay On Route 6; You Guide to All 3652 Miles of US Route 6
Posted by Malerie Yolen-Cohen at 5:39 PM