A bit of Route 6 background from Department of Transportation historian, Richard Weingroff: 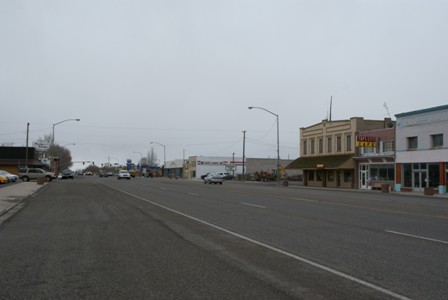 When U.S. 6 achieved transcontinental status in 1937, it was the longest U.S. route at 3,652 miles. It was not, however, paved the entire distance. When paving was completed in 1952, the news received national attention. On September 21, 1952, The New York Times noted that paving had been completed a week earlier in 100-degree heat in Utah. A planned 2-day celebration would "mark completion of thirty-three and one-half miles of arrow-straight asphalt pavement running from a point just beyond Hinckley, about six miles west of here, to Skull Rock Pass in the Little Drum Mountains."
As Business Week pointed out in its issue of October 11, 1952, the paving was much needed:

It was designated a transcontinental highway in 1937. Technically, it was. You could get from Provincetown to Long Beach on it if you chose to try. But from Delta, about 80 mi. east of the Utah-Nevada border, to Ely, some 80 mi. west of the border, you ran into trouble. Much of this stretch of road was nothing but a wagon trail-rutted, filled with dust. It was one of the worst chunks of federal road in the country.

The celebration in Delta was a sign of hope for the communities along this stretch of U.S. 6: What this means, citizens hope, is that their restaurants, gas stations, and hotels are in for some comparatively roaring business.

The ceremony was appropriately joyous:

They staged parades, ate barbecued beef, listened to speeches on how the area was scheduled for vast economic growth. In a final burst of enthusiasm, they closed off four blocks of U.S. 6 and ran a 1,500-man square dance.
Culmination of the two-day shindig came when Sen. Arthur V. Watkins (R., Utah) and Sen. Pat McCarran (D., Nev.) rode down U.S. 6 in, respectively, an 1898 Columbus-Firestone and a 1902 Oldsmobile. Driving for Watkins was Gov. J. Bracken Lee of Utah; driving for McCarran was Gov. Charles Russell of Nevada. The dignitaries chugged into Delta, disembarked, and cut a foot-wide ribbon stretched across the road. This symbolized the opening of U.S. 6.

Posted by Malerie Yolen-Cohen at 4:34 PM