Cleveland, OH to Huron, OH on US Route 6

Finally – a sunny day – and it comes with lots of heat.  But that’s OK, ‘cause I’m near the shore.  The Lake Erie shore, that is.  Today was a “catch up” day.  I took it easy distance-wise;  55 miles straight on Route 6 traversing the lake to Huron, OH.


There’s great signage for 6 as you depart Cleveland.  It’s easy to keep on the route, and also easy to cruise slowly.  You pass big-boat marinas and larger lakefront homes; some swanky, others modest.  It’s about as different from the approach into Cleveland from the east as land is to sea.  I passed fishing piers, glimpses of Lake Erie through manicured lawns, people on
bicycles; the good life.  And then, POW, the multi-stack GenOn Power Plant appears suddenly.  It seems so out of place, but I later learn that industry co-exists (nicely it seems) with recreation in this part of Lakeside Ohio.  There are few “attractions” besides the multiple opportunities to get your trailered boat into the water, or go to a beach (I question the brown, muddy looking water, but there were folks swimming, so….). 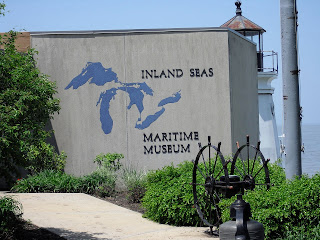 I stopped at one historic home right on Route 6 – Peter Miller House Museum (closed) – and suspect it’s the kind of place that most people who back their boats into the water around the corner have no idea even exists.  It’s the “Only standing pre-Civil War home (1830) still standing on the Lake.
I passed through towns like Sheffield Lake and Loraine – and here the homes were a bit lower at heel, with Bail Bond signs and pizza parlors dominating.  There are lots and lots of boat launch areas along this drive.  Loraine is also home to yet another Power Plant – a more modern and low slung version of the one I passed back in Avon by the Lake.
The big surprise – at least to me – was the charming little lakeside town of Vermilion.  According to Wikipedia, it’s the birthplace of the man who invented the drop ceiling; Don Brown.  But the town doesn’t really need those perplexing laurels.  It is one of the more picturesque towns I’ve passed so far, with charming homes that back up to inlets and canals – a boat at each personal dock. And in fact, it’s motto is, “Vermilion; A good place to drop anchor.” This lakeside Ohio is a recreational boater’s dream.
I ate at the ‘30’s Soda Fountain – Big Ed’s on Main St. (Route 6) where all food, no matter what it is, tastes of beachy summer.
Then I headed to the small and wonderful Inland Seas Maritime Museum and Lighthouse.  There are some captivating exhibits about Great Lakes shipwrecks, including the famous Edmund Fitzgerald that went down in Lake Superior on November 10, 1975 – all hands lost.  There’s a replica of a luxury liner stateroom, a working diorama of a steam engine, a wheelhouse you can enter and where you can pretend to steer a ship, U.S. Lifesaving equipment including yet AOTHER Breeches Buoy. There are buttons to push (fog horn, Fresnel lighthouse lens rotating), and lots of boat models.  Take a few minutes to learn about our Inland Seas – it’s worth a few dollars and a few minuts.
Huron boaters come and go in the shadow of a massive abandoned Harvest State Mills/ ConAgra plant.

STAY: Sawmill Creek Resort.  If you have golf clubs in your trunk, you’re in luck.  With a Tom Fazio designed 18 hole course, this is both a golf AND a boating resort (there’s a marina on property).  Rooms in the lodge (240 of them) are country-western-comfy ($89-$200).  Logpine walls, floral quilts, jaccuzi in-room, it’s a deluxe way to spend a night doing laundry.  Yep, I’ve been on the road ten days and it’s that time….. Good thing the resort has free laundry for guests (right upstairs from my room – hooray!), an almost Olympic size outdoor pool, a large indoor pool and a better than average on-site restaurant – Salmon Run.  On the night I dined, there was a hungry, spoiled squirrel knocking at the window to be fed.  It turned out to be the evening’s entertainment for the dozen or so happy diners.
Posted by Malerie Yolen-Cohen at 6:56 AM