McCook, NE to Imperial, NE on US Route 6

I began the day in McCook’s historic downtown, waiting until 1pm when the Museum of the High Plains opened.  I’ll let you know straight off that you need not do the same.  The Museum is a Grandma’s attic full of stuff, despite its compelling façade, and not worth hanging around town for.  But as I mentioned before, I’d hunkered down to catch up on work, and this delay allowed me to visit a place that IS worth staying in McCook for: Sehnert’s Bakery and Bieroc Café (all one establishment) on McCook’s main shopping avenue, Norris St.  Before partaking of a famous Bieroc (a better version, in my opinion, of a Runza sandwich), I drove slowly up the street to find The Sutton House – a private house designed by Frank Lloyd Wright.  It sat rectangularly on the corner of F and Norris St. – beautifully maintained by the current owners.  Lloyd Wright was of the Prairie School, so it's not too surprising that at least a few of his projects would appear in Midwestern towns.


McCook has an air of prosperity about it.  Downtown shops are not particularly lush, but neighborhood homes look loved and there’s a development of huge new houses going up adjacent to a golf club and across the street from Wallmart on Route 6.
Sehnert's Bakery has been a McCook institution since it opened in the mid 1950’s.  Baked goods there are phenomenal and my “Beiroc Lunch Special” – just $3.50 – included a hot calzone-like meat and cabbage pocket, a bag of chips and unlimited soft drinks.  Wood floor, local art work on the walls, a stage ready for live bands (on weekends), Beiroc Café could very easily be one of my cool hangouts back home in Connecticut.
As I mentioned, the Museum of the High Plains looked promising on the outside, but was a stuffy, uninspired place inside.  As a matter of fact, a volunteer said to me, “unless you’re interested in Indians, Farmers or Local Families, you probably won’t find much here.”  Wow  - an honest docent!  I snapped a few shots of an Iron Lung (bought for the town by the local Girl Scout Troop in 1941 for $1500), a 1935 movie projector and a small collection of manual typewriters, then left.
Route 6 pairs with 34 through Culbertson, then swerves right as 34 goes straight.  At that point, it becomes a tar-streaked two lane road; fun to drive despite the gusts of wind that threatened to push me off the road (but didn’t).  Here, the landscape begins to swell, and the scenery is so stunning I got lost in it. (Though never lost on 6!).  Grassy hills fold into each other like a crumbled blanket, cows graze near brown streams – this is an area known as Little Grand Canyon (again.  The first LGC I hit on Route 6 was in Pennsylvania) and dispels the myth that Nebraska is boring flatland.
I passed over into Mountain Time – gaining an hour, which was a good thing given my destination.  I didn’t know it at the time, but I ended up wanting to stay in Imperial as long as possible.  More on that in a bit. 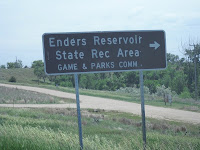 I whipped through Wauneta (“Halfway Between Here and There”) and came to the first sign of a water recreation area – the Enders Reservoir – as deep blue as the evening sky.  Across from it – a green as green golf course.  Signs of play in this land of hard work.
STAY: In a few miles, the small town of Imperial beckoned.  I cannot convey the sense of relief and serenity I felt as I drove up to the 5-room Balcony House ($75-$115). Jim and Linda Pirog moved here from Denver in 1997 after discovering  nearby Enders Reservoir as a prime water-skiing area. They purchased the Boarding School turned Migrant Worker Flophouse turned eyesore (the Fire Department wanted to use it as a “practice burn” according to Jim), gutted it and I was so taken by it, I made a little video:


Imperial is a small Western Nebraska town of only 1,900.  But unlike many of these farm communities where the populations are getting older, Imperial is attracting a younger, vibrant demographic who come here to raise their families. Allo Communications – the locally owned “Triple Play” provider, employs 25 mostly young people; the whole town is wireless.
Imperial is not a “tourist town.”  You will find no t-shirt or fudge shops or anyplace that caters to the hot-sticky set.  What you will find are terrific stores like the fabric-emporium, Prior’s Fabric Store, said to be the largest of its kind between Omaha and Denver.  And The Added Touch – a wonderfully stocked and displayed gift shop I’d place in any upscale town. Even better, it was right next door to the Balcony House!
The local weekly newspaper is the Imperial Republican, and journalist Carolyn Lee interviewed me, then toured me around town.  The newspaper is just one of four owned by Johnson Publications and all four are printed here.  Carolyn took me back to see the press, and it made me realize that we haven’t nailed the coffin on print media yet.  It’s alive and well in these small American towns.
It was Mexican Night at M&M's Natural JAZ - a sandwich shop and health food store (all other restaurants were closed), so I joined the crowds (everyone in Imperial seemed to be there) and ordered a half-portion vegie nachos.  I didn’t even finish those, though there sure were good.


My breakfast at the Balcony House was a hoot (as well as delicious) .  At a B&B, you never know who you're going to share a table with and this morning, I was lucky enough to enjoy my yummy pancakes, cheese/egg cup and fresh fruit with Imperial resident Margaret Uden and her out of town friends Vada Sutter and Dean Sell.  Margaret was a Frat House mother for decades at University of Nebraska, Lincoln - so you can just imagine the bawdy sense of humor she sports.  She lives in Imperial to be near her grandchildren and kids, but still has that larger city sensibility about her.  I told Margaret, Vada and Dean that I'd write about them so - there!

Posted by Malerie Yolen-Cohen at 8:06 AM