Nappanee, IN to Ottowa, IL on US Route 6

Nappanee, IN to Ottowa, IL
170 Miles
The day began innocuously enough, drifting by Amish furniture and handicraft stores, local quilts and light manufacturing.  But it soon turned into the Route 6 drive from hell.  All I can say is that I’m glad it’s behind me…..
For a few miles outside of Nappanee, I was literally inside a life-size train set.  Green rises, manicured golf courses, horse and buggies, freight trains cutting across my field of vision – it was a Lionnel Set writ large.
Towns like Westville and South Haven were pleasant to drive through – even the stoplights weren’t a problem.

But as soon as I reached Gary (keep my windows closed and doors locked, murder capital of the world, etc, etc), everything changed. Vacant buildings and vagrants all over. And then, I “lost” 6.  I had been pretty precise in my research – and knew that Route 6 was “Ridge Rd” through much of “South of Chicago.”  I’d been paying strict attention to signs and didn’t see any that guided me to I80.  So, I stayed and stayed and stayed on West Ridge then East Ridge and then just Ridge many many miles through what has to be the largest commercial strip urban sprawlish city-unto-itself section of Indiana/Illinios.  Mapquest indicated a right on Torrence Ave in Lansing, IL (and by the way, no way to know that I even crossed a state line, the commercial strip just all melded together) and lo and behold, there was the Route 6 sign.  So, I followed it, but it took me East onto I80.  Turning around, I noticed that Route 6W paired with 80 here, but hell if I knew where the sign to guide me onto 80 was.  Getting off on Torrence (coming West this time), I was relieved to find Route 6 signage again.
And then, in South Holland, a “Community of Faith, Family and Future” (but no fixed roadways, apparently), Route 6 was detoured in the most snaring, Rube Goldberg way for many many many more miles.  I’d spent two-plus hours on an adventure in South Side Chicago Bad Neighborhood-land, blaring hip hop and trying to appear as nonchalant as possible. 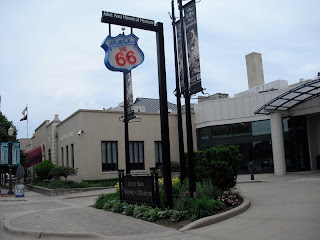 The “attraction” here was just getting out alive.
Next up, Orland Park was swanky in comparison; Lexus Dealership, higher end stores, an Olive Garden (at this point, I was happy to see even that).  Turning right onto “Southwestern 6 Highway” right before passing the big Orland Park water tower, I was finally out of commercial hell and back to farmland for awhile.
On the approach into Joliet, IL there's a nice nature park; the Hadley Valley Preserve.  I was so rattled from my drive, I almost got out to take a cleansing walk, but pressed on.
Route 6 jiggers through Joliet oddly.  You really have to watch the signs, which could be sitting on top of side-of-the-street traffic lights.  I did stop at one city attraction right on Route 6 and was dumbfounded by what I discovered: The Joliet History Museum and Route 66 Visitors Center (yes, Joliet is one of two places where 6 and 66 intersect.  The other is Los Angeles) has not one iota of information about Route 6.  Here’s Route 6 right in front of the Museum and it is roundly ignored.  I dropped off my Stay On Route 6 card and told them to change that, please.
The museum itself is a wonderful, new, interactive “walk through Joliet history.”  Watch a 12 minute video (long on city-pride), then doors open to reveal a mock-up of the I&M Canal (Illinois and Michigan) that joined these rivers to the Great Lakes, enabling a bump-up in commerce.  You walk through the canal and into a series of exhibits about the local limestone quarry and other facets of life here.  Well done.  Now, bring on the Route 6 exhibit, Joliet!
From Joliet, I drove through Chanahan where the I&M Canal trail begins, Morris, Seneca (with the last standing grain elevator on I&M Canal and former base of WWII  LST-Landing Ship Tanks –Shipyard, in addition to several marinas) and Marseilles before getting to Ottowa.  I’ll explore this town tomorrow, but must tell you where to eat and stay.
EAT: 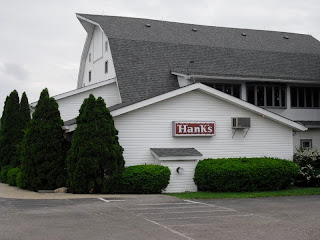 Ask anyone where to eat in Ottawa and you get the same answer; Hank’s Farm Restaurant.  A big ole Tom Turkey came over to my car as I drove up, lifting his feathers in the mating dance and giving me the eye.  I loved the place immediately.  And that was even before I met the uber-friendly staff, and my new BFF, former Phily girl, Robin Morello, who clued me into the great lamb chops there.  Hanks is “Upscale Family Style” with a bountiful, fresh salad bar, and signature Fried Chicken.  But my lamb chops were perfectly unfussy, just the way I love them, just like Robin said they’d be.
STAY:
Fox River B&B
About 8 miles out of town and off-Route 6, but worth the detour.  When Charles Lindberg had to ditch his out of fuel airmail plane in Sept. 1926 on his St. Louis to Chicago run, he found his way across the field to this antique farmhouse.  Now a charming B&B run by soft-spoken Registered Nurse,  Charlotte Beach, you can stay in the “Lindberg Room” – decorated with airplane paraphernalia – or one of 4 others.  I stayed in the very exciting “Tribal Room” with lots of animal prints, hand-drums and jungle motif.  In the morning, Charlotte whips up fresh biscuits,  cut fruit and eggs from her laying hens right outside.  These were some delicious scrambled eggs!
Posted by Malerie Yolen-Cohen at 6:57 AM