Moline, IL and the Quad Cities

Moline, IL, one of the “Quad Cities” situated on the Mississippi River, has John Deere written all over it.  Together with Rock Island, IL, Bettendorf, IA and Davenport, IA –Moline is furiously revamping, renovating and building its way into a draw for tourists. 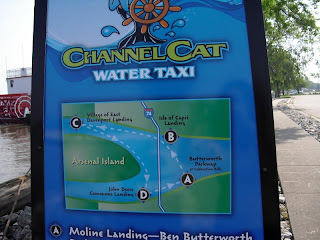 I started my day on the “Channel Cat” – a water taxi that transports bicyclists, commuters, families and others who don’t want to hassle with the jammed traffic on bridges across the swiftly flowing Mississippi.  It’s just $6 and you can ride the hour circuit (it makes stops in four places; two on the IA side and two on the IL side) and get on and off whenever you’d like.  For me, it was a way to spend some morning time on the river the way Mark Twain might have when he was Mississippi Riverboat Captain, Samuel Clemens.

We passed large mansions set on hill-tops, blue herons landing on river rocks, and rode through  decommissioned Locks.  Most people aboard got off with bikes and rode away.  Though the day was muggy and hot, it felt very pleasant on the small ferry.

The water taxi drops you off right near the John Deere Pavilion; "A celebration of Agribuisness."  Mr. John Deere moved from Vermont to Moline in 1847 to establish his plow manufacturing company, and was instrumental in getting the railroad line here.   Moline has been a Deere Company town ever since.  The John Deere Pavilion is a marvel; it’s an indoor wonderland for everyone who's ever been awestruck by big trucks and tractors. Here, you  can climb into the cabs of these gleaming, new-leaf-green pieces of equipment and pretend that you're on the job.  In fact, you can also try your hand at maneuvering a John Deere Excavator using the same simulator that trainees use.  If they can’t perform on this device, they cannot operate the real deal.  I seemed to have a knack for it – wracking up $$, rather than “machine damage costs.”  I can’t say the same for some of the guys who attempted it after me. 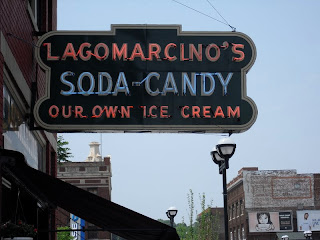 I had lunch at the only place where everyone who has ever spent any time in Moline advised me, urged me, to go; Lagamacino’s.  Founded by Italian immigrants in 1908, this tough to pronounce but easy to find place has been dishing out hand-made chocolates, ice-cream and fantastic hot fudge sundaes ever since.  Still owned and run by the Lagomacino family, not much has changed here since 1908; mahogany booths, green Tiffany-style lamps, tin ceiling, the “Green River” vivid-emerald-colored phosphate soda.... it is a city and quite possibly a National Treasure. I'm still dreaming of my delish slightly sweet tuna salad and that gooey, rich-chocolate-y hot fudge.....

After lunch, I drove though a military checkpoint (get your driver’s license ready) just over the bridge into Rock Island Arsenal; a US Army Military Installation, and current headquarters for the Iraq war.  US Army Hummers equipped with artillery are manufactured here.  There are several museums within the base, but strangely, the government US Army Corps of Engineers maintains a Mississippi River Visitor’s Center – Lock # 15 – on site.  Before the construction of the Rock Island Lock, this part of the river was rocky, rapid and hazardous to boating traffic.  Thank goodness for engineers!  Now, not only can ships pass safely through, but visitors can watch them do it.  I happened to arrive just as a grain barge was coming into the lock and caught it on video:

First to Riefe’s –(pronounced ‘reefees”), in Davenport on the “pre-1937 alignment of Route 6.” It’s a home-cookin’ Davenport institution – family owned and operated since the 40’s and the hearty food is straight out of that era.  I’ve come to find that for the most part, Midwesterners don’t like their vittles fussed with. Steak and mashed potatoes (and pretty good thin onion rings here) all the way. Awesome bread basket.  The three of us filled up on dinner for under $30 with tip.  That's TOTAL for three of us!


Next on to a Cruisin’ Classic Car gathering at the Davenport Mall parking lot (this was on current Route 6) where I met Davenport's "Santa," Mike Peppers - known as "Sergeant Peppers." Dave made sure the crowd knew about his River to River Classic Car Cruise all across Iowa next weekend.  Dave is the man behind an in-the-works Iowa Route 6 Documentary; he hopes it will be shot and ready by next Spring.  Some of the footage will be taken on the “cruise.”

Dave is a man of many talents.  Our final stop of the night was just East of Moline on Route 6 in Coal Valley at a rollicking bar called Mulligan's Valley Pub (in a nondescript strip center).  Here, Dave was called up to join the band “Identity Crisis” as vocalist and harmonica-player.  Here’s our Route 6 boy wailing out a Georgia Satellite favorite:

Stony Creek Inn; a bit of “Piney Woods” on the Mississippi.  What? Slightly Adirondack with a Western twist, Comfort-Inn type rooms are upped a notch with log pine furniture, and woodsy architectural details.  Nice bathrooms – tile shower/baths, and a plush moose waiting on the bed (for purchase, $19.95), and continental breakfast included with the room make this a very inviting place.  It’s in the center of Moline action – just a block from the John Deere Pavilion and lots more developing on the riverfront (this area of town is one big construction site at the moment), wedged between the railroad tracks and the Mississippi River.  It’s a magnet for families (there were a couple of slumber parties while I was hosted here), concert-goers  (I Wireless Center is also steps away – Michael Buble and Keith Urban are appearing soon), and travelers of all kinds.

Posted by Malerie Yolen-Cohen at 7:43 AM