Imperial, NE to Brighton, CO on US Route 6

Imperial, NE to Brighton, CO
170 Miles
It was probably the most glorious day, weather-wise, of any on this trip.  Sunny, dry and not oppressively hot.  I felt fortunate to have made it through Nebraska’s “Tornado Alley” with nary a funnel cloud in sight.
It’s 37 miles from Imperial, NE to Holyoke, CO on roads so straight and easy I didn’t realize how fast I was going until I saw the red and blue lights spinning behind me.  Oops.  71 MPH in a 60 MPH zone and if I’d just been a bit more careful for another couple of miles – once I crossed over the CO border, it’s 65MPH - I would have been in the clear.  Had to happen some time. 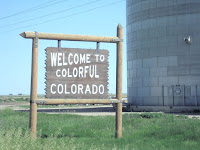 There’s a prominent “Welcome to Colorado” sign on Route 6, and no change in landscape at all.  I’d imagined a demarcation line separating farmland from mountains – because all I’ve ever seen of Colorado is the mountains, but the Eastern side of the State is like much of Nebraska; endlessly flat farmland.
The National Route 6 Tourist Association has a director in Colorado – an amiable Holyoke wheat and corn farmer named Ken Oltjenbruns who was gracious enough to leave his tractor and come downtown to let me in to the Phillips County Historical Museum.  Open for only 2 hours on Sundays, the bigger-than-it-appears-to-be collection of cars, rooms and equipment is not too accessible for the drive-through tourist, but I did learn quite a bit from the extremely friendly Ken.  I knew that most of these small Western towns exist only because of the railroad (I had been hearing that story from way back East in Pennsylvania), but what I didn’t know is why they’re set about 10 miles apart.  It was the distance a steam engine could run before requiring more water. The museum has a rare 1931 Model A with original paint job and interior, driven only to church and back by Anna Conner and lovingly donated to the town in 1976.  The Historical Assoc. also spruced up an old gas station with original pumps (non-operational) and I snapped a picture before saying goodbye to Ken.
Sure enough, towns were 10 miles apart, and instead of population signs, I began to see sea-level elevation signs as I entered each little hamlet.  Must be indicative of Colorado; foreshadowing the “Mile High City” of Denver.
I drove through Paoli, Haxton (a quiet downtown with an open! Storefront public library) and stopped in the pop. 420 town of Fleming. Ken told me to have a drink (in this case – the noon hour – it had to be soft) at Bully’s Grub and Pub – pretty much the only establishment in town.  Formerly a grocery store, people come from miles away to eat the good grub at a good price (a “Cowboy Cut Ribeye” is only $13.95 for dinner), but mostly for Bully’s Rocky Mountain Oysters, which, um, don’t come from the sea.  There are T-Shirts that play on bull’s balls cuisine; “Bully’s Nuts are Golden,” “The Original Sack Lunch,” and other more graphic slogans.  These Oysters have made waves in Chicago’s annual “Testicle Festival,” and the restaurant’s owners, Debbie and Mark Trybowski used to ship them all over the world.  But no more.  Shipping costs have just gone balls out crazy.

Route 6 goes straight under Interstate 76 in the large town of Sterling.  I could tell this was a Thruway exit; there’s a nice new visitor’s travel center and right across from it the well-endowed Overland Trail Museum (I say well-endowed because it’s going through expansion; lots of construction).  The original museum, built out of rocks from the Platte River nearby in 1936 as a WPA project, has been added on to several times over the years.  Inside, there’s a fireplace made from petrified wood, exhibits about the last Battle fought in the Colorado Territories in 1869 – the Battle of Summit Springs – when Buffalo Bill was still enlisted in the US Army.  It was this battle he depicted in his Wild West Show around the world, and who better to do it than someone who was there.  This area of the country is rich in fossils – many ancient animals met their fate in the quicksand of the Platte. James Michener conducted research for his book Centennial here.
In the late 1800’s this area of the country was truly the frontier.  And even in the late 1930’s most rural farms had no electricity.  In 1935, under President Roosevelt’s New Deal, the Rural Electrification Administration (REA) was created to bring these farms into the 20th century.  An exhibit here illuminates (…sorry..) the progression of the REA under its leader, Dave Hamil.  I found it fascinating.  The Overland Trail Museum also consists of the typical “living history” museum, but without docents.  It’s just a quick walk-through but old-time shops and services ring a lovely garden green with gazebo.  Pretty.
Route 6 goes through a commercial stretch with lights, fast-food, little well-kept and some neglected motels.  It squiggles around a handsome downtown, then traverses Columbine Park – a pretty green area for picnicking and recreation.  Here, Route 6 aligns with 76 Business.  A Historic Marker points to a monument signifying the location of the “First White Settlers” in 1873.  To put it in perspective, that was 250 years after the Mayflower arrived in Provincetown

The little town of Merino led to additional proof that half-blink Colorado towns are not a restaurant wasteland.  I found a nice, fun Jambalaya’s – a bit of ragin’ Cajun on the frontier.  Swamp theme with algae-green walls, owner Donna turns out good burgers and Buffalo Fries.  My jerk-grilled chicken sandwich was a real, plump chicken breast – too big to finish.
There are only a few buildings on main street, literally.  Across the way I checked out The Trading Post, which features local artisans – including one who creates pocket knives from ground bowling balls.
Then, the biggest surprise in this not-much-there village; the wood, marble and bronze sculptor, Bradford Rhea. Long-haired, skinny and wonderfully kind, he allowed me to come in to see his studio (there’s no sign, but it’s adjacent to Jambalaya).  The first thing I saw was the Hebrew word for G-d, topping a 6 or 7 ft. riot of trumpet-blowing angels around a big cross.  It was a strange juxtaposition, and Rhea told me that the design came to him in a dream.  He is deeply Christian, spiritual and lots of his work reflects that.  He carved a walking stick that was presented to the Pope by President Clinton. But he also does a lot of Amusement Park pieces – including carved carousel animals.  Rhea was just one of those amazing serendipitous finds on my travels cross-country.
The next town of Hillrose sports a modest mural on its tiny Town Hall building – and there’s not much else to the place.  The main street is still unpaved.  Yep  - a dirt downtown; they still exist here in Eastern Colorado!  Hillrose also has the last Route 6 sign I see all day – an Historic brown sign put there by the Route 6 Tourist Association.
But all the way through Brush, though my GPS indicates 6W for a while, street signs say 34W. And it continues this way to the beautiful downtown Fort Morgan (large industrial buildings on my way into town – though a tree-lined main street with a nice selection of shops). I stopped at the Fort Morgan Library and Museum to pick up some information about the area.  The small museum incorporates a cell-phone audio tour and it’s got a bit of everything from natural history to frontier battles and skirmishes with Native Americans to the thriving Beet Sugar industry in town.  Apparently, beets grow well in this soil and this source of sugar is big business here. The museum also contains the whole preserved Hillrose Soda Fountain (so THIS is where Hillrose went!) – it’s worth it to stop in here just to see it.
And if you’re in need of free wi-fi, it’s also worth it to spend some time in this lovely and happy library.  I asked if I could do some work there and the librarian said “of course!  Do you need a place to plug in?”  So – to the Fort Morgan Library staff, I say thank you for a peaceful writing space.
And to the State of Colorado I say – WHERE THE HELL ARE THE ROUTE 6 SIGNS?  Every other state stacks its Route 6 signage onto paired or triplexed roads so at least there’s some continuity.  This is the first time – in over 2,000 miles – that I know I’m on Route 6 but there’s no physical indication of it.
Just West of Fort Morgan, 34W/76 Bus becomes just I76W.  Stay on 76 when 34 peels off at Exit 66B, and you’ll zip by small towns through flat, scrub-brush terrain.  And then – off in the distance – the snowcapped Rocky Mountain Range!!!

I stopped for dinner at the unassuming Pepper Pod Restaurant – family owned since 1913 and a roadside institution. This is its second location  - the first was on the original busy Route 6 (a block away) "where the business thrived." The latest family member to work there, Amy, is a Culinary Institute of America (CIA)- trained chef, though it was her night off when I ordered my delicious beef shiskabob over rice.  This was probably the best meat on skewer I’ve ever had – perfectly cooked, seasoned and each piece draped with charred and caramelized red peppers and onions.  I ate beneath the gaze of several buffalo heads; representing what used to graze on this land.  If you happen to be coming by here around dinner time – this is a great place to eat. Don’t let the Denny’s type building throw you off.
Stay: It was never my intention to sing the praises of a chain hotel, but I can’t help doing so about the Holiday Inn Express in Brighton, CO – right off Interstate 76.  Less than two years old, the lobby is colorful, inviting, cushy (with leather chairs, great seating) and pleasingly decorated. There’s a salt-water pool, hot tub and large fitness center. Rooms are large – Crate and Barrel type modern furniture – in espresso, gold, copper and ecru tones.  An ergonomic chair sits at a laptop-friendly desk and a plump leather chair with ottoman is perfect for reading. The hot breakfast in the morning in a funky restaurant-like space is complementary with the room.  This is not your cookie-cutter roadside hotel, it's one of the most luxurious in its class, and I can recommend it heartily.
Posted by Malerie Yolen-Cohen at 12:44 PM