Urbandale (outside of Des Moines) to Atlantic, IA on US Route 6

Urbandale (outside of Des Moines) to Atlantic, IA

What luck to be staying right next to the very educational/enjoyable/engaging Living History Farms.  I’d stumbled upon this attraction quite by accident, and how fortuitous that it’s right on Route 6!
On 500 acres, the living History Farms encompasses both East and West “campuses.”  Right out the visitor’s center door is a mock prairie town from 1875 called “Walnut Hill” (named after Martin Flynn’s cattle farm of the same name on which the museum is now located).  As I wandered through the home and various shops, I was impressed with the docents who remained in character right down to period dress.  When I opened the door to the home of a typical “middle class family” of the day, I smelled food on the stove and expected to be asked to lunch.  A couple of interpreters stood at the ready within each shop in “town” (on a wide dirt road with boarded sidewalks); the lawyer in a law office told me, “I both represent and sue the railroad depending on the day.”  Inside the Newspaper office (The Advocate), a type-setter was busy setting up the day’s news (to be printed later).  It was one of the most extensive antique printing displays I’d ever seen.  I wish I could have spent more time in the Pharmacy, General Store, Doctor’s Office and other shops.  This is a great “mini” Williamsburg, and a magnet for families.  To get to the West campus, you must jump on a tractor-driven trolley, which runs under I80 through a tunnel, and drops you off at a trailhead.  From here, I ambled on a nice woodsy interpretive dirt path through 300 years of Iowa farming history, signs providing the simplest of facts: “900-1000 AD corn is first planted in Iowa,” “1676 Ioway Indians begin trading with French.”  And then, I came upon the first of three settlements – a small Indian Village.  And wouldn’t you know there was someone dressed in beaded hide explaining Native American dress to rapt kids.  I saw the same amazed looks on kid’s faces in the 1850 Farm, next up through the woods.  A farmer was yoking his two oxen, while the bovines just seemed to roll their eyes.  “This again….the stuff we must put up with.”  By the time I got to the 1900 farm, there was lots of pork, greenbeans, fried potatoes and bread pudding a cookin’ – a typical hearty midday meal for farm folk.  A calf had been born three days earlier in the barn and Mom, ready to be milked, was separated from her baby.  She was mooing mournfully, until one of the docents relented and allowed the calf to nurse. I see why Living History Farms has been around for 41 years; it’s a well-done, low-tech method of preserving, showcasing and respecting Iowa's farming heritage from one generation to another.  A very worthwhile day’s activity (or at least 2 hours!).

Route 6 heads south from here, under the Interstate on Hickman Rd. It’s a 4-lane divided road into the supercenter-filled Des Moines suburbs and into Waukee, about 5 miles away.  Route 6 takes you into Adel, with its imposing French Castle Courthouse right in the middle of a nice town square.  Inspired by a 1529 French Chateau, the courthouse cost an astounding $109,000 when it was built in 1902.  With several towns around vying to become County Seat, each raced to build the most incredible edifice.  It now looks completely out of place in this modest community of 3,700.  I met Chad Bird, City Administrator, for a bite at the new, funky Brick St. Café and was very impressed with the café’s décor (library meets coffee house) and fresh custom sandwiches.  I ordered mine on just-baked Ciabatta bread, and it was wonderful.  I always like to give a shout-out to these foodie-type places where I least expect it, so here’s my shout out Brick St.! No website yet – but call – 515-993-1811.
The Adel Historical Museum was closed (what a surprise), but Chad got the keys and took me into the former schoolhouse turned private residence turned museum (open only on Saturdays and by appointment).  This is another “Grandma’s Attic” type place, but nicely arranged.  If you’re a Heisman Trophy expert, you might like the little exhibit on Native Son, Nile Kinnick whose name appears on street signs all over town. 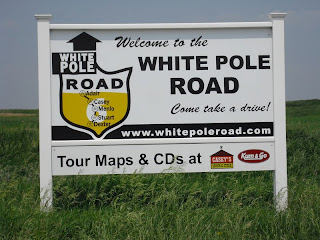 Route 6 joins Interstate 80 a few miles from Adel.  I jumped on the boo-hiss thruway just for a few miles (OK, 15), then got off at the Dexter/Redfield F60 exit.  It’s not marked as such on I80 (right – of course not), but if you take a right off the ramp and then an immediate left, you’ll be at the start of the White Pole Road.  Formerly Route 6 (YAY), this road flanked by telephone poles painted bottom-half-white is now a 26 mile trip through very small Iowa towns. Like most, they usually encompass only one downtown street that ends in a series of grain elevators.  These days, most shops are boarded up and chained, and this was the case in Dexter.  The little Dexter Museum – not a soul.  The Rusty Duck Restaurant – chained shut. 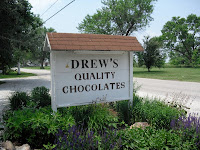 But start heading West on the WPR, and you’ll spot a small red house on the left.  In front there’s a sign – Drew’s Chocolate.  Stop the car, open the door, head downstairs, and get the surprise of your life.  It’s like finding a Godiva Chocolate shop in the middle of the desert.  Drew’s ships its individually fork-dipped candies all over the world and even makes the most decadently creamy-fat-laden ice-cream.  Chocolatiers still use the original early 1900’s milk-chocolate dipper that Helen and Lloyd Drew used when they opened their shop in 1927. Stop in for a demo and samples.  Factory-made candy will never live up to these morsels again.
Next up, Stuart, is “Home to 1,700 Good Eggs and A Few Stinkers,” or at least that’s what it says on its billboard.  How would you like to be identified as a “stinker” in that town? Apparently, a lot, as Stuart runs some kind of Stinker Pagent.  At least it can make great fun of itself.  Stuart is also the location of a bank robbed by Bonnie and Clyde in April 1934, and a massive Romanesque Church that seems very out of place.
A smiling waving White Rose Gasoline cut-out greets you as you enter Menlo on the White Pole Road.  Hook a right into “town” – (and again, I put that word in quotes because there are two or three storefronts.  That’s it).  One, however, is worth a stop; the Menlo Café owned by Denise Miller.  Several years ago, the Des Moines register did a piece on the White Pole Road and featured Denise and her great Butterscotch Pie.  So many people came in to ask for it, she was forced to bake a few per day.  But she does other desserts well, including the trifle she shows off here.  The café is a pleasant place to have lunch; the food is good and the service and other patrons are extremely friendly.

There’s no signage on the WPR, which makes it frustrating, and sometimes exciting as you stumble on finds. Denise gave me directions to “Freedom Rock” and I’ll pass them along; drive West from Menlo on the White Pole Rd. until you come to a Greenfield arrow pointing left. Take the left, go over I80 and in a couple of miles you’ll see a painted rock on the left hand side.  It’s usually surrounded by people – mostly veterans who come to pay their respects and use it as a touchstone. Literally.   The artist, Ray “Bubba” Sorensen II (named “America’s Hottest Husband” by Redbook Magazine a few years back), uses the ashes of fallen vets mixed with paint in his poignantly rendered war scenes.  He repaints the 5 or 6 ft. tall boulder every Memorial Day.  This year, he included “ 5-15-11; Justice Served.”
Go back to the White Pole Rd. west to the next town of Casey.  There’s another Sorensen mural  - this one painted on the side of a building – in a tiny pocket park next to the now closed K-C Café.  Casey used to be an antiquing hub, but I didn’t see one shop open today.

Continuing West, in a few miles outside of Adair, you’ll come to the site of the First Train Robbery in the West in 1873 by the outlaw Jessie James. What is it with Iowa and its fascination with robberies? Or the more important question - why was it so susceptible to getting robbed?
Right around here, you’ll see this Iowa wind being put to good use.  Hundreds of turbines as far as the eye can see.  Here, the White Pole Rd. is Route 83. At this point, I was listening to the Commodity Report on the radio and realized that when a “stock” is up, the newscaster is talking about soy, corn and hogs.
By the time I got to Atlantic (through Anita and Wiota), Route 83 had merged with 6W (which had come off the Interstate).  What a difference from the other boarded up dusty towns.  Atlantic’s commercial Main St. offers open thriving businesses (for the most part); some women’s clothing shops, gift shops and a pharmacy over which an old-fashioned Rex sign revolves slowly.  It’s exactly what I’d imagine a Midwest Main St. to be.  Neighborhoods are shaded with lovely old growth trees.  A lovely town.
Stay:  Options are few in Atlantic.  There’s the Super 8 and possibly other skeevy motor inns.  I decided to stay in the Chestnut Charm B&B, and passed a stormy night without TV or Internet, but cozy in my palatial room.  The place is a throwback, in need of a bit of updating and freshening up.  But my room was large, the bathroom nicely tiled and also big, and architectural details in the common area parlors and throughout the home are preserved well. The 1898 Victorian Mansion was yet another wedding gift from tycoon to his daughter (who does that anymore?) and owner Barbara Slensvad opened it up for the first time as an inn in 1989. In the morning, she serves an excellent gourmet breakfast made from ingredients as local as her garden. Eggs and bacon come from nearby farms, and the peach and raspberry cobbler muffins (fragrant and oh so good) are made with peaches from her own tree and berries picked from her garden.   As a blogger, though, the lack of wifi was annoying, though Barbara did let me know where I could go in town for free internet.
My fellow guests were a great Mom and Daughter duo; Katherine and Ann Siochi from Iowa City.  When they hauled in a harp from their mini-van, I knew this wasn’t your normal mother/daughter getaway.  Katherine is heading to Julliard in the Fall – and after you see her play, you’ll see why.  I just happened to capture her practicing on my trusty FlipVideo…..

Eat: slim pickings here.  There are really no good restaurants unfortunately and I could just see Sysco backing up to the kitchen of the Feedlot.  The name says it all. But the waiters were friendly and the food was filling.
Posted by Malerie Yolen-Cohen at 7:19 AM