Moline, IL to Iowa City, IA on US Route 6


Cross the Mississippi on I74/6 and it takes you through Bettendorf and on a wide bypass around Davenport.  Davenport, the largest of the Quad Cities, has several attractions, however, that you may want to check out.


Take a left onto Brady St. and you’ll almost immediately cruise through the campus of the world’s first (and official) Chiropractic College – the Palmer College of Chiropractic, established here in 1906.  There’s a museum somewhere, but I had no time to hunt it down.

Descend Brady St. to the river and turn right.  You’ll soon come to the all glass contemporary Figge Art Museum.  Nice to pop into if you have some time.  I didn’t.

The art museum sits across from the Union Station Visitor’s Center.  In the spirit of reclaiming train depots for another non-train-oriented generation to enjoy, this is a great place to start a two hour riverfront Segway Tour with Cole Chaplin.  Cole is a local college student (he went back to school after serving in the Coast Guard in New York City for three years) who started this segway tour business with a classmate.  He’ll narrate as you glide along – you’ll learn a lot about the Quad Cities while having a blast ($30 per person).  I had to scoot out of there, so couldn’t afford the two hours, but I do wish young Cole well.  He’s planning to become a US Marshall after graduating college.

Route 6 leaves Davenport on I80W, and it was only moments before I came to the World's Largest Truck Stop.  This place is a beacon for weary cross-country truckers and, according to one has “the best showers anywhere – better then most homes.”  The I80 Stop also has a theater, big laundry mat, several restaurants, a food court and tons of shopping areas.  There’s a room full of truck accessories; steering wheels, lights, lenses, stacks, hood ornaments, apparel.  A trucker could spend hours here picking out items to individualize his/her rig.  This is the Granddaddy of Interstate attractions and probably/hopefully, the only one I’ll be highlighting on this blog. 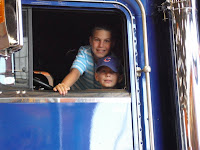 Next door, a new Iowa 80 Trucking Museum offers looping 50’s road-travel movies (of an era – the gas station attendants wear sharp uniforms in most of the flicks), and you can ogle meticulously restored antique trucks – like a 1923 Mack AB with it’s signature Bulldog hood ornament, and a 1930 Studebaker Series S.

Dave Darby convoyed with me to show me the way, and he has a particular fondness for the OLD Route 6, which NEVER paired with Interstate 80.  When the highway system placed the “New 6” on 80, many of the old 6 towns shriveled and died.  Dave convinced me to take my readers off the new Route 6/80 for a few miles, if only to see the damage done.

I agreed, partly because Mapquest still does show Route 6 through these towns.  From the Large Truckstop, go south to the tiny town of Walcott and take a left onto F58, a right onto Main St. and quick left onto E. Bryant St.  You’ll see a Castle House – built by an eccentric doctor in 1903 in the design of a Scottish castle.  Now, it’s decrepit and boarded up – as is much of the nearly ghost-town.  Continuing West on F58 (old 6 and still shows as 6 on Mapquest), you come next to Durant, then Wilton (“Ready for Tomorrow”), home to Wilton Candy Kitchen.  Owned by 91 year old George Nopoulos and his wife, he’s been dishing out the same soda fountain food and homemade ice cream for 75 years.  But being 91, his hours are sporadic and unfortunately, the Wilton Candy Kitchen was closed when I came through.  I took a picture through the window, however, and Dave tells me that it’s one of the few successful businesses in the area.  I can see why – nostalgia sells well these days, and coupled with unbeatable homemade ice-cream, sells even better.  I was sorry I missed it.  Wilton has also jumped on the Train Depot restoration bandwagon, but the little towns here in Iowa are even worse off, financially then those of the struggling railroad towns to the East.  The Depot was open, but dusty, amateur and in great need of organization. The attending volunteer mentioned that at one time,  Rock Island RR trains zoomed by here at 90 MPH. I can’t imagine anything going that fast in this sleepy place.  There was some graffiti from 1913, which I thought was pretty neat.

Road F58 does T into Route 6 a few blocks west of the Wilton Candy Kitchen (it exits off the interstate here), so I rejoined it and left Dave heading East.

Route 6 here is endlessly rural, until the “Progressive” town of West Liberty, known for the food company of the same name that supplies most (if not all) of turkey meat to Subway shops all over the USA.  I drove to the restored Train Depot that serves at the Chamber of Commerce office, but it was closed. I then attempted to find the 1883 Secrest Octagonal Barn,  but drove right through brick-street neighborhoods dappled in shade from old growth trees without seeing one sign.  West Liberty Main St. has much more going for it than the lonelier-cut-off-from-Route-6-Iowa towns to the East, with shops, a few restaurants and a theater.

The 17 mile drive to the city was, again, a lulling, heart-rate-soothing experience; farmland rising and falling in soft swells around me.

Before finding Iowa City's downtown, however, I followed brown signs to Plum Grove Historic Site.  If I see a sign, I follow.  Plum Grove is the home of Robert Lucas– the first Governor of the Iowa Territory in 1840’s – and his wife, Friendly.  Though considered mid to upper class, the home is a modest brick two story plains structure which as been significantly renovated.  If you are fascinated with gardens or political life in the new territories, Plum Grove is worth a stop. I was told on good authority that every local 3rd grader comes here on a field trip to learn local history.

From there, I drove off 6 downtown.  I was shocked to find a sophisticated, walkable, gastronomically adventurous, hip city center.  Iowa City is a  UNESCO designated "City of Literature," one of only a few in the world - most likely due to the fact that the world-renowned Iowa Writer's Workshop is based here.

The last time I stayed in a hotel like this was while researching New York City boutique hotels for an upscale magazine.  My lodging expectations for the Midwest had been dialed down considerably, so walking into my huge room, floor-to-ceiling wall of windows, camel and espresso-colored carpeting, couch and settee, poured concrete floors in a glassed-in bathroom with soaking tub and glass shower, large flat screen TV, luxury linens, I was suddenly disoriented.  And then ecstatic.  To add delight to an already deliriously delightful situation, the Vitro is located right on the large restaurant/café/cute-shops-studded pedestrian mall, which also incorporates both the Public Library and a terrific kid’s playground.  Co-eds, seniors, families – all are happy, walking, eating.  It’s like Portland, OR without  tie-dye.

I had great sushi at Formosa, which happens to be in the lobby of the Hotel Vetro but not associated with it.  My "Caterpillar Roll" was fresh and tasty, and, since this is an eminently walkable town and I didn't plan to drive, I had a glass of wine, too. I capped off dinner with a stroll to local ice-creamery, Whitey's.  Something about a hot summer night and thick/creamy/chunky ice-cream puts everyone in a good mood.  (Or maybe it was the wine!).

I also heard about an Iowa City institution; Hamburg Inn #2 (#1 burned down apparently), a favorite of visitors and politicos in town for the Iowa Caucus.  On the last go round, Good Morning America broadcast from there, and every candidate shows up at one time or another.  Can't vouch for the food- I heard it's pub grub.

Posted by Malerie Yolen-Cohen at 8:28 AM