Idaho Springs, CO to Glenwood Springs, CO
Over Loveland Pass
125 Miles
Everyone says it; Interstate 70 is an engineering marvel.  It cuts through and up and over our country’s highest mountains, curves drastically through canyons and makes flatlanders like me a bit nervous.  Throw in SNOW conditions in the heat of the summer, and there’s a recipe for heart-pounding hours on the road.
From Idaho Springs, I drove a dozen miles to Georgetown and exited the interstate to take a tour of the Hotel De Paris Museum.  Georgetown is another old silver mining town, once much larger than Denver and a prime destination for traveling salesmen.  Built by entrepreneur Louis Dupuy, The Hotel De Paris served these travelers beginning in the 1880’s, and I took a great tour of this very-well preserved establishment; it is truly a time capsule of the era.  The docent handed out booties to slip over my shoes, so as not to damage original hardwood floors.  Those profiting from silver mining in the late 1800’s craved culture and sophistication, so salesmen arriving on the Georgetown Loop Railroad would set up temporary “retail” shops, taking orders from locals, then wiring back to New York or other cities for shipments. The hotel offered in-suite bathrooms (very rare for the day), hot and cold running water and central heating.  The restaurant was a revelation – Dupuy owned a cattle ranch and supplied his own meat.  The Hotel De Paris was also known for its seafood – which was displayed in an ice-laden fountain in the center of the dining room. The 30 minute tour is definitely worth a stop, and Georgetown itself is a charming, boutique and gallery studded hamlet in the Rocky Mountains.
But it was time to move on – to the next adventure; Loveland Pass. Route 6 leaves I70 at Exit 216.
The switchbacks, hairpin turns and heart-stopping drop offs are all part of the fun of Route 6 up and over the Continental Divide in a 22 mile stretch called Loveland Pass.  I decided to sit in the passenger seat this time so as not to put myself in danger while taking video.  The drive featured pea-soup fog and a bit of icy precipitation, but that didn’t stop the seemingly hundreds of skiers from barreling down the still-operating Arapaho Basin, nicknamed A-Basin – the highest skiable terrain in the United States.  I stopped to take a picture of the Continental Divide plaque, and nearly froze.  It’s mid-June and it’s 30 degrees up here.
Loveland Pass bypasses the Eisenhower Tunnel.  The Tunnel prohibits tanker trucks, so those fire-traps on wheels had to negotiate the hairpin turns and switchbacks as well.
In Dillon/Frisco, I got back onto 70 at exit #205.  Frisco has some history and a nice downtown, but most were closed on the day I came through, and then, there was this darn snow.  Ordinarily, snow would be terrific, as I AM chugging through some of the best ski areas: Copper Mountain, Bighorn, Vail, Beaver Creek. I had wanted to stop at the Betty Ford Alpine Gardens (the world’s highest botanical garden), but weather conditions made that impossible.  I exited I70 once again at Mile 171, onto Route 6, driving right past the Beaver Creek entrance.  What a relief to get off the interstate and meander along at 35MPH – no trucks- for a change. I passed pretty piney hills, freely driving between the Eagle River and I70.  When I lost sight of Route 6 signs I knew it was time to get back onto the interstate at Gypsum.
Shortly, the imposing Glenwood Canyon portion of I70, completed less than 20 years ago, heaved into view.  I’d heard about rockslides and boulders hitting cars, and yes, I was a bit apprehensive.  But the weather had cleared and with it my fears; I was too busy being awestruck to worry, anyway. Part of the Glenwood Canyon thruway is cantilevered over the Colorado River, and I70 follows the very curvy path of the river, like a 14-mile side-winding snake.  The road was not the only transportation path within the canyon.  While driving, I saw a very long freight train hugging the canyon wall as well – on the opposite side of the river.  Cars and train were mirroring each other – a seemingly impossible and elegant dance. 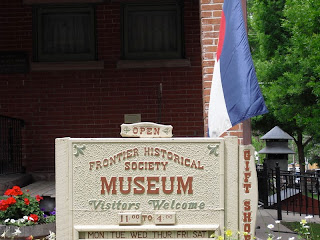 Then, I was in Glenwood Springs.  As usual, I hit the Frontier Historical Society first to get a lay of the land – and discovered that Glenwood Springs has been a resort town from Day One; first for the ancient Ute Indians, then, in the late 1800’s for everyone else.  Though it was tough to get here, Easterners would stay for the summer – principally to take in the “curative” waters but also to ogle new technology.  In 1886, a hydroelectric plant began supplying power to the whole town; Glenwood Springs was one of the first towns in the country with electricity. On the second floor of the museum, you can watch the 1926 Tom Mix movie “The Great R &A Train Robbery,” which was shot in the canyon.
There are two “Must Experience” in Glenwood Springs, whether you stay here or not.

1.     Take a tour of Glenwood Caverns.  In order to do this, you have to take a Gondola up to Adventure Park – a mountaintop Frontier-themed amusement park with mostly human-and-gravity-propelled rides.  You can Zipline, Bungee Jump, ride an Alpine Roller Coaster, climb a rock wall, play lazer tag, and test your mettle on the Giant Canyon Swing.  Or – you can do none of these and just take the cave tour, in itself worth the cost and ride up.  The 70 minute walk through fabulous formations is enhanced by chirpy guides who point out where the original owner, Charles Darrow, discovered the entrance to the cave in 1890’s.  (Called Iron Mountain, Darrow purchased it for potential iron mining). In 1895, Darrow opened the cave up for tours, and in 1896 brought in electricity. As the first tourist cave attraction in the world with electric lights, Glenwood Caverns became a global sensation.  The new owners are exploring more and more cave routes and might be offering longer tours in the future.  For now, you can take a 3 hour “wild cave” tour, which brings you into tight, dark and muddy portions of the cave.  I stuck to the drier, well-lit, but very entertaining cave tour.
2.  Take a dip in the “The World’s Largest Hot Springs Pool” – Glenwood Hot Springs nearly three football fields in length.  Water is pumped from the original 122 degree hot springs, mixed with river water and a bit of chlorine (state regulation) – and it is absolutely delightful.  Though huge, there are usually lots of couples, friends and families cavorting about; it had sort of a European feel about it.  There’s nothing like doing a slow backstroke while staring up at the mountains.  There are several ways to access the Pool.  You can buy a ticket for $18 , which entitles you to the public changing room and locker, you can “upgrade” to the Fitness Center for $30, which provides a nicer locker/changing room, steam room, sauna and other fitness amenities.  Or, you can book a spa treatment at the beautiful world-class Spa of the Rockies, and for an additional $20 get the “Club, Swim, Spa” package.  I should have timed my day to indulge in the “Signature Spa of the Rockys Mineral Massage” which includes a heat pack loaded with 34 essential minerals ($95 for 50 minutes), or to take a Vichy Shower, “a human car wash,” as my guide called it, but I’ll know for next time.
Eat: At Vic’s Route 6 Grillhouse!  Opened just a month ago, this is Bart Victor’s second restaurant.  His first – Vicco’s Charcoalburger Drive In right next door, has won accolades and mentions in national magazines and newspapers. The Route 6 Grillhouse offers wonderful, fresh cuisine and apparently opened with a bang. On a weekday night, the room – decorated with classic car and 50’s roadside paraphernalia - was packed. Bart is gregarious and friendly; customer satisfaction is his number one goal. He smokes his own meats, cooks his own turkey breasts – nothing is frozen – and veggies at the salad bar look and taste newly-picked.  A classic car collector, Bart restored an old Fleetwood Cadillac and plans to use it as a “house car” – to pick up guests staying in nearby Route 6 motels.   Menu items range from Escargot to Buffalo Wings, Hungarian Goulash to incredibly tasty Marinated London Broil (I can personally attest to the seared-and-juicy perfection of this dish).  Bottles of wine will run you $25 - $40 – Bart doesn’t want to gouge his patrons.
For lunch, try a fresh-brewed ale or porter at the Glenwood Canyon Brew Pub in the Hotel Denver.  I had a decent Oriental Noodle Salad with Grilled Chicken ($9.50) and a taste of the deliciously sweet and snappy Hanging Lake Honey Wheat Ale. This is a cool local hangout across from the Spring Pool.
Stay: The Red Mountain Inn is a charming little Motel with clean, comfy, Comfort Inn like rooms. Cottages do not front the main street but cluster around a central driveway, creating an intimate atmosphere.  The relatively low price ($88 - $122)  for such an expensive resort area draws lots of families and budget-minded travelers who don't want to skimp on great amenities, like free wi-fi and a continental breakfast.  This is a friendly, cheerful Mom and Pop motel of another era when the customer was king and queen.  At the Red Mountain Inn they still are.
If you want to splurge a bit, consider the Glenwood Hot Springs Lodge where rooms are being redone in earth-tone contemporary décor and feature I-Pod docks, wi-fi, large flat screen TV’s, microwaves and granite bathrooms.  The Lodge’s main advantage is that it’s located right across the street from the Hot Springs Pool.
Posted by Malerie Yolen-Cohen at 8:54 AM