Hastings, NE to McCook, NE on US Route 6

Hastings, NE to McCook, NE
Today was cold, drizzly and mucho windy; no visibility during the earlier part of the day.  White cement grain elevators rose out of the mist like aliens in a Steven Spielberg flick every few miles, making for an eerie morning drive.


I’d started to see signs and billboards for Harold Warp Pioneer Village east of Hastings; and when I got to Minden, NE I saw why.  It’s one of those Roadside Attractions from the heyday of Route 6 – it stands right on the route (not on the Interstate) – pulling car-trippers in on their way to elsewhere. 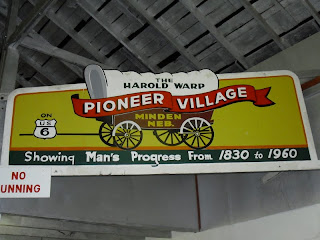 Harold Warp was a pioneer in plastics – he invented “Flexiglass” long before DuPont came out with Plexiglass – and used his fortune to buy anything and everything he could.  He put all of these antiques in one place – and now you can tour a complex of 26 buildings containing 50,000 objects ranging from little figurines to 40ft. cruising boats and full-sized airplanes.  That the boats and airplanes look dwarfed in some of these buildings is testament to the vastness of this “Village” and man o man is it overwhelming.  Among the multitudes of Conestoga Wagons, Model T’s, Antique Fire Engines, and thousands upon thousands of dusty artifacts are gems like an old horse-drawn Standard Oil kerosene delivery truck, a limestone Government Land Office, a small sod home (representative of a home here in the Grasslands), a Pony Express Relay Station, a Beauty Parlor diorama inside “rooms of yesterday and today” (today being 1960)warehouse in which a mannequin is having her hair “cold waved” with a device that would scare the bejeesus out of anyone.  I managed to read a few descriptive signs and some waxed poetic; “With his plow, the pioneer farmer conquered the woods, subdued the sods of centuries and converted the soils of virgin continents to the use of man.” I blew through the whole Village in over an hour – but some people spend days here.

Back on Route 6, it was beginning to clear up as I made my way through Axtell  (“The Windmill Village” though I saw no windmills), Funk (“Home of Funk Lagoon” – ditto for any lagoons), and then Holdrege where I stopped at the Nebraska Prairie Museum. (Take a right onto Route 183 and it’s up about 2 miles on the left).

Just half an hour from Pioneer Village, I walked into the massive airport hangar sized museum (one enclosed acre!) and was initially crestfallen. Oh no, I thought.  Another glass-case, jumble of donated attic stuff arena.  How wrong I turned out to be.  The museum’s director saw the look of overstimulation in my eyes and said – “This is what you really want to see.”  He took me to the Camp Atlanta exhibit and an intimate art gallery beyond that.  Little- known Camp Atlanta held over 100,000 German prisoners of war during WWII (around 3,000 at a time), and one man, Thomas F. Naegele, a 20 year old refugee from Germany, served his time in the US Military as an interpreter there.  Naegele was also an artist, and many of his small folk-art paintings hang in a contemporary gallery built specifically for his work.  I was enchanted by the playful and somber portraits of life at Camp Atlanta and hope to be in touch with Naegele who now resides in New York (and is in his 90’s).  What a find!  The rest of the museum was more impressive than I first believed it to be, with a great turn-of-last-century downtown, with terrific shop vignettes and a mock-up “police station” displaying the very same guns used in a 1989 Holdrege shootout (which was recreated on America’s Most Wanted).  The Museum also has an intimate space used to interview war veterans on video.  The stories of 36 vet have already been recorded with more planned.  Holdrege was also home to the county’s first “flying doctor,” who, in 1919, did not trust the roads to travel long distances.  And from 1888-1954, 1,100 orphans were placed through the local Christian Children’s Home.  Every year, those still alive have a reunion here.  I left the museum with a greater knowledge and appreciation for the prairie town of Holdrege.
Back on Route 6 W, I was looking forward to lunch at the Wigwam shaped “Husker’s Hut” in Atlanta, but found it abandoned and junked up.  Too bad.
In Arapahoe, I’d been told to eat at Take 5 Restaurant, but that, too was shuttered.  I did stop into Wagner’s Quilts and Conversation – a terrific little fabric shop owned by a mother (Ruth Haarberg) and daughter (Gretchen Kubik) team.  Ever since Lincoln and the quilt museum, I found a new fascination for quilting, and this thriving store has everything you’d ever need – including quilting classes.  Among the few shops that make up downtown Arapahoe is the Arapahoe Pharmacy with soda fountain squirting out Green River phosphates and the like.  I’m seeing a pattern here – not much has changed in these small-town pharmacies except the drugs.
Heading West, the sky cleared as I rolled through beautiful green farmland dotted with cows, listening to a country song on the radio; “My House is Protected By G-d and My Gun.”  Get my reflective hunting vest - pronto!
I’ve been seeing Historic markers signifying the Wagon Trail through here and it isn’t difficult to imagine convoys of prairie schooners sailing across this rich grassland.
STAY: I stopped in Cambridge at the Historic Cambridge B&B, owned and run by Gloria Hilton for 14 years.  It’s an impressive place with 5 grand guestrooms and opulent parlors and dining room. Gloria told me that Cambridge is known for its archeological finds – “some of the oldest in the world.”  Apparently, wooly mammoth and saber tooth tiger remains have been found beneath the soils here.  I would have stayed, but wanted to press on to McCook for the night.
Every so often I require the anonymity of a chain hotel to catch up on my work, which is why I chose the Days Inn McCook, NE.  It was actually better than it was in my mind’s eye (which had it in a remote, empty lot), and there were families with kids, across the street from a movie theater, and hosted lots of normal-looking travelers.  And free Wi-Fi.  Yay!!
EAT: McCook has three, count ‘em, three Mexican Restaurants!  I chose La Cocina – because of its colorful façade and the good number of patrons I could see through the windows.  It did not disappoint – not in the least. Tortilla chips were freshly made and warm and came with a small carafe of homemade salsa.  And my Coconut Shrimp Mango Salad was fresh and tasty – with a kick – a perfect end-of-day meal.  My trepidations about eating and staying in McCook were unfounded.  It’s an historic town with a good museum and interesting downtown and I’ll discuss that in tomorrow’s post.
Posted by Malerie Yolen-Cohen at 8:47 AM